In the Test series against England last year, India preferred playing just the lone specialist spinner in all-rounder Ravindra Jadeja alongside four pacers. It meant that ace off-spinner Ravichandran Ashwin never got a look into the playing eleven throughout the tour as India took a 2-1 lead before the fifth Test in Manchester was rescheduled to July 1-5 at Edgbaston this year. 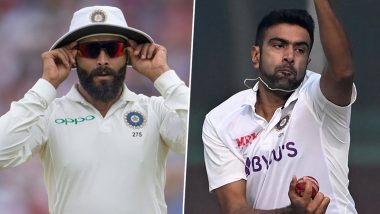 Mumbai, June 29: In the Test series against England last year, India preferred playing just the lone specialist spinner in all-rounder Ravindra Jadeja alongside four pacers. It meant that ace off-spinner Ravichandran Ashwin never got a look into the playing eleven throughout the tour as India took a 2-1 lead before the fifth Test in Manchester was rescheduled to July 1-5 at Edgbaston this year.

With India now returning to play the fifth and final Test of the series at Edgbaston, both Ashwin and Jadeja are coming back into Test cricket action after longish breaks. While Ashwin picked two wickets in the final innings of the warm-up match against Leicestershire after recovering from Covid-19, Jadeja made 13 and 56 not out with the bat while picking 3/28 and 1/35 with his left-arm spin. Graeme Swann Feels Edgbaston Would Suit Ravichandran Ashwin’s Type of Bowling.

Former India all-rounder Ajit Agarkar feels that playing Ashwin and Jadeja together in the playing eleven at Edgbaston is completely dependent on the conditions available for the match. "I am sure there will be a conversation around that (on making Ashwin and Jadeja play together). But it will all depend on the conditions, if the pitch is green or overhead conditions or there is likely to be seam and swing, India could play with four seamers.

"I think Shardul (Thakur) can offer enough with the bat at eight and did that as a fourth seamer in South Africa as well. That's generally been the combination in the last series. They might look at (continuing) that unless like we saw in Leeds, there was a lot of spin on offer." "If that's the case, then you have got two world-class spinners; the record tells you that of having taken over 200 (Jadeja, 242) and 400 (Ashwin, 442) Test wickets. But it will completely depend on whether the pitch has anything to offer as the game progresses," said Agarkar in a virtual interaction organised by Sony Sports. IND vs ENG 5th Test: Joe Root Says, 'I Am Sure Ben Stokes Has Got the Plans for the India Test in Place'.

With Jasprit Bumrah and Mohammed Shami certain to play, India will be concerned with who plays the third seamer role. Last year, Mohammed Siraj picked 14 wickets in four matches, including taking eight wickets in a famous victory at Lord's. On the other hand is Umesh Yadav, who rattled England's batters in the win at The Oval while scalping six wickets in the match. Agarkar remarked that he would pick Siraj as the third pacer and bring in Thakur, who notched up twin fifties last year at The Oval, as the fourth seam option for Edgbaston.

"I think Siraj had a really good series last year when India played those four Tests and he is one of the most improved bowlers around at the moment. I don't see any reason why Siraj would miss out. Shardul offers a bit more with the bat at number eight and if there is help for the seamers then he becomes even more effective if there is some swing and seam on offer. "I think that's the way India will go, otherwise the tail becomes a little bit too long at eight if you look at someone like Umesh Yadav or even Prasidh Krishna who is part of the squad for the one-off Test. Shardul probably would make it if India go with four seamers."

Agarkar thinks that Siraj's chances of being part of the playing eleven in Edgbaston won't be affected by his unmemorable performance in IPL 2022, taking just nine wickets in 15 matches for Royal Challengers Bangalore (RCB). "I don't think Siraj necessarily bowled badly and there is no need to equate IPL to Test cricket in England really. You see his form in Test cricket over the last 12 months, even when India played New Zealand at home, he was really good. "He can do the tough work for you and when the ball is a little bit older, he can bowl long spells; still run in and bowl quick. You need those sorts of guys and I would be very surprised if he is not the third seamer," said Agarkar ahead of the much-anticipated fifth Test match against England which will be broadcast on Sony Six and Sony Ten 3 channels from July 1-5.

(The above story first appeared on LatestLY on Jun 29, 2022 10:33 AM IST. For more news and updates on politics, world, sports, entertainment and lifestyle, log on to our website latestly.com).