England vs West Indies 1st Test 2020: James Anderson vs Kraigg Brathwaite and Other Exciting Mini-Battles to Watch Out for in Southampton 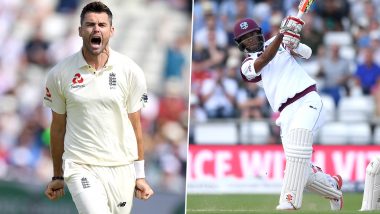 International cricket will be finally back after 117 days as England are set to take on West Indies in the first Test of three-match series. The encounter will be played at the Ageas Bowl in Southampton and will get underway on Wednesday (July 8). England will certainly step onto the game as favourites. However, they will not have the services of their regular skipper Joe Root and all-rounder Ben Stokes will lead the side in his absence. On the other hand, West Indies have a quality pace attack and some batsmen who have done well in English conditions. Well, a tight contest between the bat and the ball is expected to witness in the upcoming game. Below, we’ll look at some mini-battles which one can witness during ENG vs WI 1st Test 2020. England vs West Indies, Southampton Weather, Pitch Report & Rain Forecast: Here’s How Weather Will Behave.

Due to the COVID-19 crisis, bowlers will not be able to shine the bowl with saliva and it will be interesting to see what impact it will have in the game. Nevertheless, the likes of James Anderson and Jofra Archer were seen moving the ball both ways in the practice matches which will certainly give some encouragement for the fast bowlers. Meanwhile, let’s look at some exciting mini battles which can enhance the thrill of the encounter. England vs West Indies 1st Test 2020: Ben Stokes, Shai Hope, Jofra Archer & Other Key Players to Watch Out for in Southampton.

Veteran England pacer James Anderson seems to have aged like wine and is only getting better with time. The right-arm pacer will aim to swing the brand new red cherry in order to pierce the defences of Windies batsmen. However, Caribbean opener Kraigg Brathwaite will have the onus to neutralize the Anderson effect and give his side a good start with the bat.

Buttler might not have enjoyed a great run Test cricket in recent times. However, the wicket-keeper batsman certainly has the capability to change the course of the game in no time and the visitors must be aware of the fact. Nevertheless, West Indies have the services of Kemar Roach who can move the ball both ways and that too with the brisk pace. Also, the right-arm pacer is just seven scalps away from completing 200 Test wickets and he’ll look to achieve the feat in the first Test only.

This is one contest which fans are eagerly waiting to witness. Stokes and Holder are certainly two of the best all-rounders going around and will look to get the better of each other. Also, the two talismans are leading their respective sides and it will be interesting to see who’ll come on top in this battle.

(The above story first appeared on LatestLY on Jul 08, 2020 09:37 AM IST. For more news and updates on politics, world, sports, entertainment and lifestyle, log on to our website latestly.com).