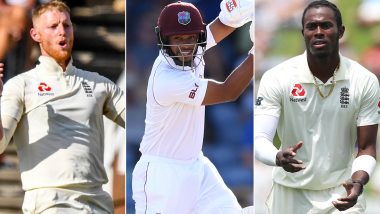 England host West Indies in cricket’s return to action for the first time since a global pandemic halted sporting events for over three months. England and West Indies will face off in the first Test of a three-match series starting July 8 (Wednesday). The first Test match will be played at the Rose Bowl Stadium in Southampton. The game will mark cricket’s return to action but under different circumstances. The match will be played behind-closed-doors in empty stadiums and in a bio-secure bubble. As both teams prepare to face each other in the first Test match, take a look at some key players ahead of the clash. All-Rounders Take Centrestage As Cricket Returns Amid COVID-19 Pandemic.

Both teams will be rearing to return back into action after a wait of more than three months. West Indies beat England 2-1 in the last series they faced off. But that three-match series was played in the Caribbean Islands and West Indies haven’t beaten England away from home since 1988 and are chasing their first series win in 32 years. Meanwhile, take a look at some key players who can impact the result of the opening Test match. 5 Records & Stats You Need to Know Ahead of the England vs West Indies Test Series.

When England last played a Test series at home, Ben Stokes was a hero. He had just helped England to a maiden World Cup win and his heroics also helped England draw the Ashes after going two matches down. Stokes will hope to repeat his heroics and will have an additional urge to do it with him also set to make his captaincy debut for England. England vs West Indies Head-to-Head Record: Ahead of the Series Opener, Here Are Results of Last Five ENG vs WI Test Matches.

With regular skipper Joe Root unavailable, Root had separated from the team to be with his wife who is expecting their second child, Stokes will walk out as the captain and will be eager to lead England to a win.

Two of Kraigg Brathwaite’s eight Test centuries have come against England. He has also scored a 95 against England and that innings against Leeds, when West Indies were here the last time, guided West Indies to a sensational win when it looked that the game was heading for a draw.

With Shimron Hetmyer and Darren Bravo also absent from the visitors’ squad, Brathwaite will be among West Indies’ influential players if the visitors are to taste their first series victory on English soil in 32 years.

Another architect of West Indies’ miraculous win at Headingley in 2017, Shai Hope will be West Indies’ next best batting mainstay as they chase a first series win in England in a long time. Hope scored centuries in both innings in that Test at Leeds leading the Caribbean side to a sensational win.

But that was also Hope’s last hundred in the longest format of the game and since then he has played 19 Test matches and scored four half-centuries but is yet to register a Test hundred.

Against England, however, Hope averages 42.33 in Tests and showed his prowess with the moving ball with some defining knocks in the ICC Cricket World Cup 2019 where he was West Indies’ best batsman in an otherwise disappointing campaign.

He was England’s find of the year 2019. In just seven Test matches, Archer had already scalped 30 wickets and also has three five-wicket hauls to his name. The lanky fast bowler, however, has to prove his mettle in the longest format like he has in limited-overs cricket. Archer will lead England’s three-man pace attack and his form will be key if England are to make a perfect start to playing cricket again.

When England visited the Caribbean, Kemar Roach was on fire. He took 18 wickets in three Test matches, which included a five-wicket haul and three consecutive four-fers. With 42 wickets in his last 12 Tests, Roach is now just seven short of becoming the first West Indies bowler to record 200 Test wickets since Curtly Ambrose in 1994.

Both Roach and England will certainly remember the Bridgetown spell where he left England stuttering with five wickets in just 27 deliveries.

(The above story first appeared on LatestLY on Jul 07, 2020 08:41 PM IST. For more news and updates on politics, world, sports, entertainment and lifestyle, log on to our website latestly.com).