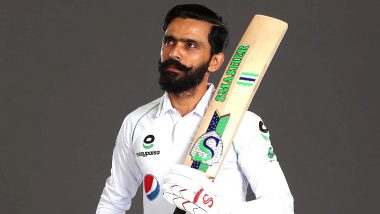 Fawad Alam makes his Test comeback as he has been included in Pakistan’s playing XI for the second Test against England, which is being played at the Rose Bowl Stadium in Southampton. The 34-year-old has brought in as the replacement for Shadab Khan, the visitors only change from the first match and this will be the left-handed batsman’s first game for the national team in the longest format in almost 11 years. ENG vs PAK 2nd Test 2020: Live Score and Updates.

Fawad Alam made his Test debut for the Pakistan national team in July 2009 against Sri Lanka at Colombo and scored a ton on debut, becoming the first Pakistan batsman to son away from home. He featured in three Tests that year but since then his career in the longest format came to a sudden halt. Live Cricket Streaming of Pakistan vs England 2nd Test 2020 Day 1 on Sony Six, PTV Sports.

Fawad Alam has featured in One Day Internationals and T20Is for the national team but wasn’t able to make it into the Test XI. So as the 34-year-old takes the field as a Test player for Pakistan after 3,910 days, cricket fans congratulated the batsman.

This is it guys. Now that Fawad Alam is playing today all will go right with the world, In Shaa Allah. https://t.co/mon8h4xw1V

A big congrats to our 2017 & 2018 professional Fawad Alam - who makes his return to the Pakistan side for the Test Match vs England Today 💚💛 pic.twitter.com/Mu1oDXdGbJ

Now lion (fawad alam) is in the 😎😎 pic.twitter.com/zuywp2ElQB

Since Fawad Alam last played an international Test match, Pakistan have played 88 games in the longest format, which is the second-biggest gap between two outings for Pakistan, with only Younis Ahmed missing 104 matches between 1969 and 1998.

Fawad Alam has a decent record in Tests, in the three matches he has played for Pakistan, the 34-year-old has amassed 250 runs which includes a century. His highest score in the longest format is 168 runs, which he scored on his debut against Sri Lanka.

(The above story first appeared on LatestLY on Aug 13, 2020 04:15 PM IST. For more news and updates on politics, world, sports, entertainment and lifestyle, log on to our website latestly.com).