Guy Proposes a Girl on LIVE TV Who Said 'Yes': Watch Video of the Cute Proposal During IND vs ENG 2nd ODI

What made the visuals 'better' was David Llyod’s commentary, who was narrating the action. 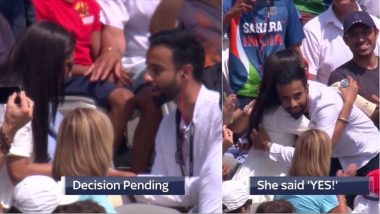 Last year during the Ashes we witnessed a unique proposal in the stands of a cricket field. During first Australia vs England Test, a guy proposed to girlfriend in front of a packed stadium. And now, same happened during India vs England second One-Day International (ODI) at Lord’s London. What made the visuals 'better' was David Llyod’s commentary, who was narrating the action. Fortunately, for the guy, the girl said yes which was conveyed to the audiences alike ‘Third Umpire’ decision style.

Fans watching the cricket match on TV were quick to notify others on Twitter and in no time, the pics and videos of the same were shared by the users on Twitter. The reactions kept pouring in with the funniest ones winning the internet.  India vs England 2nd ODI Live Score Updates.

Meanwhile, England opted to bat after winning the toss. The home side once again got off to a decent start with an opening pair of Jonny Bairstow and Jason Roy putting up a half-century stand. It was spinner Kuldeep Yadav, who once again made life tough for English batsmen. The wrist-spinner removed both the England openers in quick succession to dent England. Rohit Sharma Gets a Sweet Proposal from a Loving Brother on Behalf of His Sister!

Best thing is that.. she quickly says yes ❤️❤️❤️

Joe Root and captain Eoin Morgan then kept England’s scoreboard ticking with a century partnership for the third wicket. The duo added 103 runs before Morgan was dismissed on the bowling off Kuldeep Yadav. For the uninitiated, the spinner picked 6/25 in the first ODI, which helped India take a 1-0 lead in the three-match series. At the time of filing this story, Root was going well after having scored his half-century.

(The above story first appeared on LatestLY on Jul 14, 2018 06:03 PM IST. For more news and updates on politics, world, sports, entertainment and lifestyle, log on to our website latestly.com).