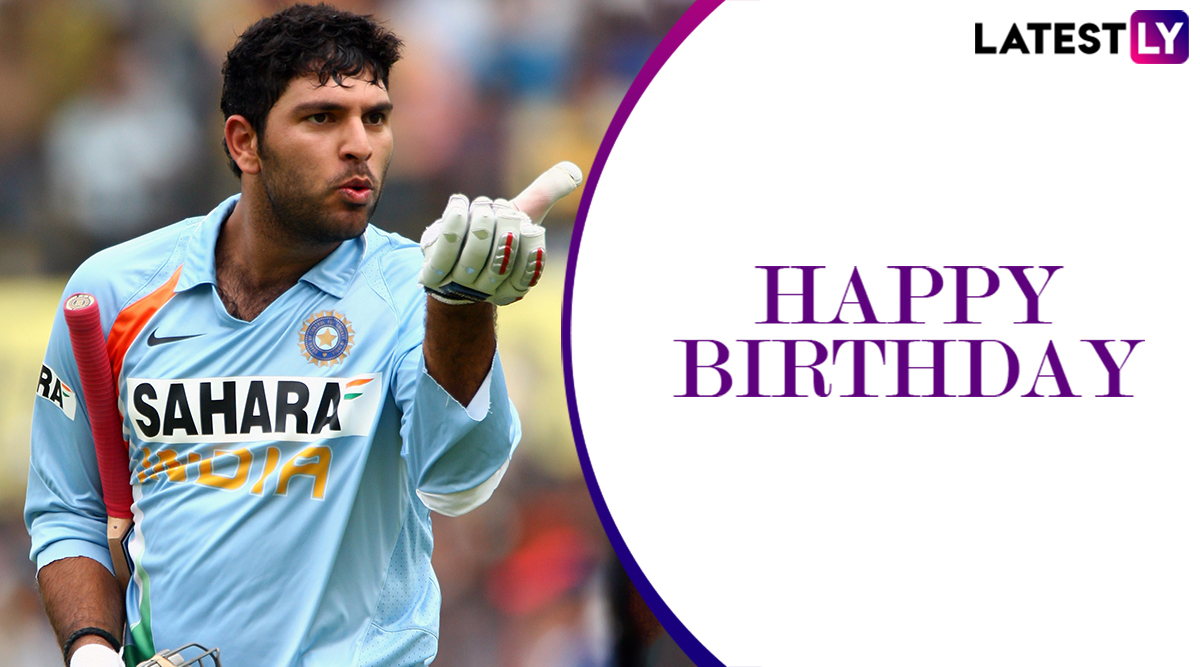 India's legendary all-rounder Yuvraj Singh rings his 38th birthday on Thursday (November 12, 2019). The Punjab-born player also played a key role in guiding India to the title in 2007 World T20 and 2011 World Cup and will go down as one of best players to have graced the game. Playing explosive knocks, giving breakthroughs with the ball or taking unbelievable catches, Yuvraj did it all and his heroics must still be fresh in the minds of many cricket lovers. In spite of all these abilities, the cricketer's biggest strength was dedication as along with being a formidable force on the cricket field, Yuvraj Singh defeated cancer too. Yuvraj Singh Sets The Dance Floor On Fire at Manish Pandey and Ashrita Shetty’s Wedding Reception (Watch Video).

Yuvraj made his international debut way back in March 2000 and immediately made his mark by scoring 84 in his maiden ODI innings. Since then, the cricketer never looked back and guided his nation to many triumphs. Talking about his stats, the cricketer made 8701 runs in 304 ODIs, 1177 runs in 58 T20Is along with 1900 runs in 40 Test matches. On many occasions, Yuvraj has also changed the course of the match with his bowling and has taken 148 wickets in international cricket. Well, these numbers are astounding at any standards but they certainly can't depict the impact of the star all-rounder. Meanwhile, let's look at some of Yuvraj's best knocks on his 38th birthday. Yuvraj Singh Makes West Indian Cricketer Chadwick Walton Speak Punjabi, Leaves Suresh Raina & Praveen Kumar in Splits (Watch Video).

58 Against England in Durban

An Indian fan can certainly never forget how the southpaw unleashed his carnage and hit Stuart Broad for six sixes in a single over during the India vs England match in 2007 T20 World Cup. Earlier in the innings, the southpaw got involved in a heated argument with Andrew Flintoff but who thought the result will be this. He also went on to score a fifty off just 12 balls which is still the fastest in International cricket. Courtsey his cameo, India posted 218 runs in the first innings and later won the match by 18 runs.

70 Against Australia in Durban

Another blitz of Yuvraj Singh in 2007 T20 World Cup game against Australia in the semi-finals. Batting first, the Men in Blue didn't get off to a great start and were reeling at 41/2. Nevertheless, the dashing left-handed batsman came to the party and attacked the bowlers from the outset. He smashed the likes of Brett Lee and Mitchell Johnson and scored 70 runs off just 30 balls. His knock powered India to 188 runs in the first innings which proved to be enough as the Aussies felt 15 runs short of the total.

113 Against West Indies in Chennai

Bloo-Vmoniting wasn't able to break perseverance of Yuvraj Singh as he played a sensational innings the Caribbeans in 2011 World Cup. In the Chennai heat, the batsman came into bat at number four despite his health issues. However, the fact didn't come in his way as he played some glorious shots and gave his side an upper hand in the match. Yuvraj scored his 13th ODI ton as India scored 268 runs in the first innings and later clinched the match by 80 runs.

150 Against England in Cuttack

Just when many thought that Yuvraj's days in international cricket are over, the southpaw made a scintillating comeback and registered his highest ODI score against England in the 2nd ODI of 2017 series. At one stage, India were tottering at 25-3. However, Yuvraj joined forces with MS Dhoni and brought India back on track. Yuvraj did most of the damage as rained boundaries and sixes in the latter part of his innings and guided India to 381 runs in first innings. England failed to chase the target and lost the match by 15 runs.

139 Against Australia in Sydney

Facing Australia in their own den is surely the last thing a team would have wanted in the early 2000s. However, a young Yuvraj Singh stood strong against the challenge and played a brilliant knock in the 7th ODI of India's 2004 Tour down under. The likes of Rahul Dravid and Sourav Ganguly were back in the hut inside 15 overs but Yuvraj came to the team's rescue. He looked at his prime and scored 139 runs off just 122 deliveries. However, his efforts went in vain as Australia clinched the match by two wickets.

The star cricketer bid adieu to international cricket in August 2019 and since then has played some T20 matches in leagues around the world. In the current lot of Indian all-rounders, the likes of Ravindra Jadeja and Hardik Pandya have showcased their capabilities and will certainly to replicate Yuvraj’s heroics at the highest level.