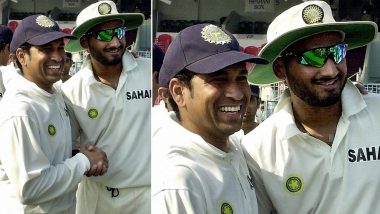 Veteran Indian off-spinner Harbhajan Singh turned 40 on Friday (July 3, 2020) and birthday wishes poured in for him from all over the world. On the occasion, former Indian batting great Sachin Tendulkar also took to his official Twitter and extended wishes to him. However, his greetings were in Punjabi which bagged the attention of many fans. "ਜਨਮਦਿਨ ਦੀ ਵਧਾਈਆਂ ਭਜੀ। ਤੇਰੇ ਤੋਂ 40ਵੇਂ ਜਨਮਦਿਨ ਦੀ 40 ਪਾਰਟੀਆਂ ਲਵਾਂਗਾ। ਖੁਸ਼ ਰੇ ਹਮੇਸ਼ਾ""। (Happy Birthday Bhaji. I will take 40 parties for your 40th birthday. Always happy) Have a good one my friend,” wrote the legendary cricketer while sharing a picture with his former teammate. Happy Birthday Harbhajan Singh: Virat Kohli, Yuvraj Singh Lead Cricket Fraternity In Wishing Turbanator.

Harbhajan and Sachin have played a lot of cricket together and seem like sharing a great bond too. In fact, Harbhajan recently revealed that it was Sachin only who was impressed by the Punjab-born born’s ability during a Mohali net session in 1998. Following which, he boosted the offie’s confidence by saying that he’ll play for India someday.

The prediction proved to be spot on Harbhajan made his national debut in 1998 and the rest his history. With 711 wickets in international cricket, Harbhajan is the highest wicket-taker in Test cricket to date. Well, he might be in the twilight of his career. However, he’s still determined to play T20I cricket for India again.

(The above story first appeared on LatestLY on Jul 03, 2020 08:30 PM IST. For more news and updates on politics, world, sports, entertainment and lifestyle, log on to our website latestly.com).