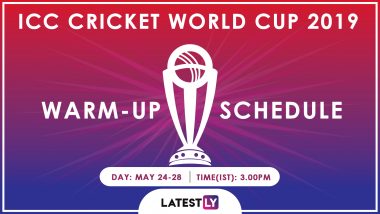 The 12th edition of Cricket World Cup, officially known as ICC Cricket World Cup 2019 is all set to begin from May 30 in England and Wales. The ten participating teams are - Australia (defending champs), England (host nation), India, Pakistan, Sri Lanka, South Africa, New Zealand, Bangladesh and Afghanistan. But before the teams begin the CWC19 campaign, they are scheduled to sweat it out playing ICC Cricket World Cup 2019 warm-up matches. Beginning from May 24, there will be a total of 10 warm-up fixtures with each side playing two matches in the run-up to the main event. Get ready to find out Team India’s fixtures including match timings in IST (Indian time), venue details. Here’s the complete ICC Cricket World Cup 2019 warm-up schedule timetable in PDF format that you can download for free online. Download The Schedule Here at LatestLY.

The warm-up fixtures are to be played between 24-28 May 2019 ahead of ICC Men’s Cricket World Cup 2019. Two matches will be played on each day. Four stadiums are selected for the warm-up games; they are - Bristol County Ground, Cardiff Wales Stadium, Hampshire Bowl and The Oval. On the first day, Pakistan will take on Australia while Sri Lanka will play South Africa. India led by Virat Kohli will play their first warm-up match against New Zealand on May 25 (Saturday). They will again play Bangladesh on May 28 (Tuesday). ICC Cricket World Cup 2019: Meet Captains of All 10 Participating Teams.

Speaking of rules associated with ICC Cricket World Cup 2019 warm-up games, it will not bear any official ODI status. It will be played in the 50-over format and teams can field all members of their 15-man squad during the match. All the matches will be played at 3.00pm IST (Indian Standard Time).

ICC Men’s Cricket World Cup 2019 Managing Director, Steve Elworthy, was quoted saying, “It is always a huge milestone announcing an exciting warm-up schedule for the ICC Men’s Cricket World Cup as it really highlights just how close we are to the action getting underway this summer. These games provide another fantastic opportunity for fans to see world-class players at their local venue and allows the tournament to engage local schools and communities with another chance to get involved with the Cricket World Cup.”

(The above story first appeared on LatestLY on May 14, 2019 12:54 PM IST. For more news and updates on politics, world, sports, entertainment and lifestyle, log on to our website latestly.com).