ICC T20 World Cup 2021: From Shakib Al-Hasan to Wanindu Hasaranga, Here Are Five Players To Watch Out for in Round 1 of the Competition

The T20 World Cup provides opportunities to new players make an impact at the global level while making way for veterans to enthrall cricket fans all over the globe. Round 1 of the competition would feature some stars and also some players who are unheard of, but can make a serious impact. Let us take a look at them. 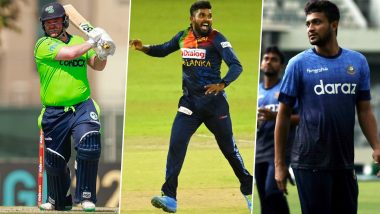 The T20 World Cup 2021 is just about to get started in a few days' time and the cricket fans would be eagerly waiting for some hotly contested matches and nail-biting finishes. The competition, which was postponed from last year due to the COVID-19 pandemic is finally taking place in Oman and UAE this  October and it would be a platform where many veterans would once again reinstate their authority over the game while other new stars keen on grabbing the spotlight.India vs Pakistan, ICC T20 World Cup 2021: Here’s Virat Kohli’s Record Against Traditional Rivals in T20Is

The competition kicks off with the Round 1 matches from October 17 which involve the following teams-Sri Lanka, Oman, Bangladesh, Papua New Guinea, Ireland, Scotland, Netherlands and Namibia. Four out of these eight sides would proceed to the Super 12 stage where bigger challenges would await them. Let us take a look at the players to watch out for in the first round of the T20 World Cup: India vs Pakistan, ICC T20 World Cup 2021: Virat Kohli vs Babar Azam Stats Comparison; Here’s How the Two Star Batsmen Fare Against Each Other in T20Is

Shakib Al Hasan: The veteran Bangladeshi all-rounder has been around for quite some time now and would once be a crucial performer for his side if they are to advance to the Super 12 stage. Known for his wily left-arm off-spin, he would play a big role in the predictably slow tracks in Oman and with the willow, he can surely hit some big ones and also finish off close games. He has been in good form recently while playing for the Kolkata Knight Riders in IPL 2021 in the UAE and would aim to carry on from thereon.

Wanindu Hasaranga: Hasaranga has been one of those few new stars in the Sri Lanka and he has a good year so far. The leg-spinner has bowled well in the series against India and South Africa, his impressive performances earning him a contract with Royal Challengers Bangalore in the IPL. His ability to spin the ball and also score crucial runs in the lower-middle order would be vital for Sri Lanka as they aim to make it through to the Super 12 where they could compete against the bigger teams. If the 2014 champions were to rewrite history, Hasaranga would be one of those to bank on.

Paul Stirling: A self-professed fan of former Indian cricketer Virender Sehwag, Paul Stirling has been playing the same way for Ireland for many years now. The right-handed opener has been one of Ireland's best products with the bat and with a big tournament ahead of him, fans would watch out for another rising T20 star who has the potential to take the tournament by storm. Just a day ago, he broke Indian skipper Virat Kohli's record of most fours in T20 cricket, while hitting his 288th boundary as compared to the former's count of 285.

Bilal Khan: The only fast bowler to feature in this list, Bilal Khan would be a key performer for Oman as they go into the T20 World Cup. He was one to guide Oman to this tournament in the first place, with his scorching yorkers derailing Hong Kong's batting lineup in the T20 World Cup qualifier in 2019. Once again, the right-arm quickie would look forward to repeating his heroics with the ball this time in the first round of the showpiece event and he would surely aim to pull off another similar performance!

George Munsey: The left-handed opener has been a revelation for Scotland and has had a fantastic 2021. Munsey's last few scores read--50 vs Papua New Guinea, 58 vs Oman and 67 vs Ireland and this indicates how good is his form recently. Scotland would rely a lot on him to provide them blazing starts in the powerplay and also do some big-hitting at the end, provided he stays at the crease in the end overs, In 2019, he and his Scotland captain Kyle Coetzer scripted a 200-run opening stand in a T20I against Netherlands! And he hit 14 sixes in that knock of 127 runs off just 56 balls. Mindblowing!

Apart from these names. players like Sri Lanka's Dushmantha Chameera, skipper Dasun Shanaka, Bangladesh's Mustafizur Rahman, Netherlands veteran Ryan Ten Doeschate and Reolef Van der Merwe and others would also be ones whom fans would want to perform well so that they can more of them in the Super 12 stage.

(The above story first appeared on LatestLY on Oct 12, 2021 08:47 PM IST. For more news and updates on politics, world, sports, entertainment and lifestyle, log on to our website latestly.com).