India vs Pakistan, ICC T20 World Cup 2021: Virat Kohli vs Babar Azam Stats Comparison; Here’s How the Two Star Batsmen Fare Against Each Other in T20Is

Both Kohli and Azam have emerged as two of the best in modern-day cricket and the India vs Pakistan high-octane clash in the T20 World Cup 2021 this month, would witness these two in action. Who would come out on top and establish himself as the better one, in the shortest format of the game? 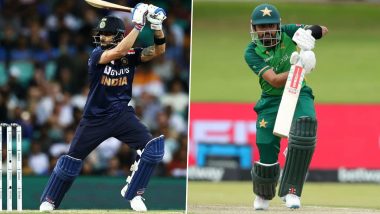 The upcoming edition of the T20 World Cup this month would not just see a marquee clash between India and Pakistan but underlining that battle would also be a clash between two top-class batsmen from their respective countries--Virat Kohli and Babar Azam. Incidentally, these two mercurial cricketers would be leading their respective sides and fans from both these countries and the world in large, would witness an epic clash, which can perhaps, settle the debate as to who the better batsman among the two is. India vs Pakistan, ICC T20 World Cup 2021: Tickets for IND vs PAK Cricket Match Sold Out!

Quite interestingly, the current Pakistan captain is a huge fan of his Indian counterpart and he revealed earlier that he followed Kohli's match-winning abilities and wanted to develop his game accordingly. Kohli has indeed set a standard for batsmen to follow and one can indeed argue that Azam has learnt a lot from his 'idol' and is now set to take on him, toe-to-toe. Although many can argue that Kohli cannot be brought into comparison with Azam, given the fact that the latter is a much more experienced cricketer, but the Pakistani 26-year old has shown enough examples as to why he can be talked in the same bracket as his reported, 'idol'.

According to the stats above, one can clearly infer that Kohli has a superior record to that of Azam, courtesy of the fact that he has played much more matches in the shortest format of the game. Quite naturally, his runs and average are more than that of Pakistan's captain given the fact that he is one of the most consistent cricketers in the Indian team. One area where Azam is ahead is that he already has a T20I hundred (122, being his highest score) while Kohli's best knock is that of 94, unbeaten runs. The Indian talismanic batsman would be eager to change that number in the upcoming T2O World Cup and who knows, he may end up setting a bigger example for Azam to follow, and potentially, surpass one day. The Pakistan right-hander is currently ahead of Kohli in the T20I rankings as he placed second. Kohli is fourth on the list.

Recently, Azam surpassed Kohli in becoming the fastest to get to 7000 T20 runs. He did it in the 187 innings, 25 less than Kohli, who took 212 innings to achieve the landmark. Pakistan cricket, you have a real gem on your hands as Azam can potentially become one of the best that the country has produced. As for Kohli, well, the world already knows who he is and what he is capable of when he gets his eye in, at the crease.

(The above story first appeared on LatestLY on Oct 05, 2021 09:42 PM IST. For more news and updates on politics, world, sports, entertainment and lifestyle, log on to our website latestly.com).