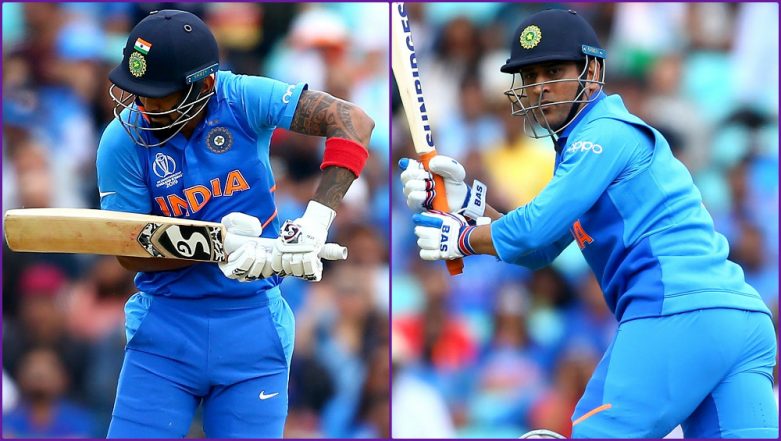 Cardiff, May 28: A new day, but it was the same old story for the Indian top-order as the overcast conditions got the better of the much-famed batting line-up in their warm-up game against Bangladesh in Cardiff. While New Zealand had gone for the kill after sniffing blood, the Bangladesh bowlers couldn't manage the same as the Indians finished on 359/7 in their 50 overs, riding on a brilliant century by K.L. Rahul and a dominant 113 by old warhorse M.S. Dhoni. MS Dhoni Hits a Quick Century Against Bangladesh in ICC Cricket World Cup 2019 Warm-Up Match.

Keeping aside those two knocks and the quickfire 46-ball 47 from skipper Virat Kohli, it was again a case of conditions making the batsmen sweat. While ODI deputy Rohit Sharma managed 19, opening partner Shikhar Dhawan scored just 1. The much spoken about Vijay Shankar also managed just 2 as the Indian scoreboard read a scary 102/4 at one stage. But the 164-run partnership between Rahul (108) and Dhoni ensured that another embarrassing collapse was avoided. KL Rahul Beats Vijay Shankar for Number Four Spot With a Century During India vs Bangladesh ICC Cricket World Cup 2019 Warm-up Match.

Even though Rahul scored a century, it wasn't before he played and missed quite a few. In fact, while the Indian team management decided to stick with Rahul at the much-debated no.4 slot, it would have been interesting to see whether a bowling attack with better penetration would have let Rahul fly away to a century after a start that saw him woefully short on confidence.

The sun peeping through the clouds and Dhoni's acumen also helped as the former Indian skipper looked to ease pressure off Rahul by taking the attack to the Bangladesh spinners. In fact, it almost looked like the Dhoni of old as he used the depth of the crease to perfection against the Bangaldesh spinners.

But then, these warm-up matches are to fine-tune the areas that need attention. And going by the form of the Indian batsmen in the top half, there is plenty to worry for skipper Kohli and coach Ravi Shastri.

Dhawan was the first to go as he was trapped plumb in front after he planted his foot across the line of the ball from Mustafizur Rahman. His worry with the one that leaves the left-hander was clearly behind his undoing in this case.

In case of Rohit, it has to be more of disappointment and frustration at the way he chopped one onto his stumps due to his inability to read the slowness of the ball. Trying a pull off the front foot, he looked to have played the shot a tad bit early.

Kohli's dismissal was against the run of play and it doesn't and it was a case of over attacking. While it is no justification, but then, Kohli's form is definitely not a worry when it comes to adapting to English conditions. But Shankar's typical dismissal behind the wicket off pacer Rubel Hossain will definitely be a cause for concern. Trying to play at one too close to leave, all Shankar managed was an edge to the keeper.

But every dark cloud has a silver lining and on Tuesday, it was Dhoni putting up a brilliant show of batsmanship as he first guided Rahul and then went into a zone as he sent the Bangladesh bowlers on a leather hunt in the death overs. It was only poetic justice that he brought up his 100 with a six in the 49th over of the innings as skipper Kohli cheered on from the dressing room with teammates for company.