India vs South Africa 1st ODI 2022 Preview: Likely Playing XIs, Key Battles, Head to Head and Other Things You Need to Know About IND vs SA Cricket Match in Paarl

Under new leadership, India would aim to beat South Africa at home and avenge their Test series loss. KL Rahul would be seen captaining India in ODIs for the very first time with Jasprit Bumrah as his deputy. 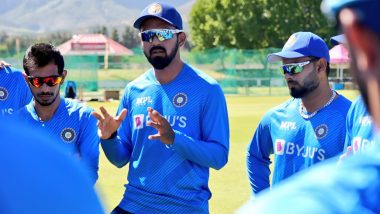 India and South Africa head to Boland Park in Paarl to reignite their competition and rivalry in the three-match ODI series, the first of which begins on January 19, Wednesday. The visitors showed great fighting spirit in the Test matches while South Africa, being the underdogs with a mostly inexperienced side, outclassed the mighty Virat Kohli-led team in the series to script a famous comeback win. Now with renewed confidence and vigour, they would aim to carry on that same form and momentum in the ODIs hoping to emulate a similar result. But the job would be far from easy. India would be seen under KL Rahul, the captain for the very first time in ODIs as he and his young team aim to upstage the Proteas in the ODIs, repeating a feat that Kohli had achieved back in 2018. IND vs SA Dream11 Team Prediction: Tips To Pick Best Fantasy Playing XI for South Africa vs India 1st ODI 2022 in Paarl

Ahead of the first ODI, there are a few talking points. One of them is KL Rahul's batting position. Should he open, then Shikhar Dhawan might get an opportunity to make his comeback to the team. If he decides to bat at four, then it opens up the pathway for Ruturaj Gaikwad to make his deserved ODI debut. Alongside Gaikwad, Venkatesh Iyer, who has been impressive since the second leg of IPL 2021, is also expected to make his ODI debut in the role of an all-rounder. It remains to be seen what bowling combination the Indian team opts for. With stand-in vice-captain Jasprit Bumrah stating that Mohammed Siraj is fit, the Indian team might prefer him over Bhuvneshwar Kumar. But Bhuvneshwar has more experience in limited-overs cricket, something that might work in his favour.

Also, all eyes would be on Kohli the batsman. With the burden of captaincy no longer on his shoulders, many would anticipate the run-machine to once again prove his prowess with the bat and silence detractors. South Africa meanwhile, would have Temba Bavuma as skipper. The hosts have some exciting prospects in Rassie van der Dussen and also Marco Jansen, who had a terrific Test series against India. Not to forget, they also have the skills of Tabraiz Shamsi, who can pose a great deal of threat to any opposition on his day. Who Will Be India’s Next Test Captain? A Look at Three Leading Candidates To Replace Virat Kohli for the Role

India and South Africa have played 84 ODIs against each other. South Africa lead the head-to-head record with 46 wins. India have 35 victories. The remaining games did not produce any result.

For India, Virat Kohli and KL Rahul would be very important players. As mentioned before, Kohli would aim to bat with more freedom now that he does not have to worry about captaincy. Rahul on the other hand, would be in the focus for his performance not just as a batter but also as a captain.

The first ODI would present many mini battles in the game. The clash between Virat Kohli and Kagiso Rabada, something that would carry on from the Tests, would be one to watch out for. So would be the duel between Quinton de Kock and Jasprit Bumrah.

The first ODI between India and South Africa would be played at the Boland Park in Paarl on Wednesday, January 19. The match is set to begin at 2:00 pm IST (Indian Standard Time).

Live telecast for India vs South Africa 1st ODI match will be available on Star Sports channels as Star Network holds the broadcast rights for India tour of South Africa 2021-22. The game will be telecast live on various Star Sports channels in multiple languages including Tamil, Telugu and Kannada apart from English and Hindi. Disney+Hotstar will also be live streaming the game online for fans in India. Fans can watch the live streaming of IND vs SA 1st ODI on Hotstar app as well as on the official website.

(The above story first appeared on LatestLY on Jan 18, 2022 12:37 PM IST. For more news and updates on politics, world, sports, entertainment and lifestyle, log on to our website latestly.com).