Who Will Be India’s Next Test Captain? A Look at Three Leading Candidates To Replace Virat Kohli for the Role

With Virat Kohli's sudden announcement of resignation as Test captain, a lot of names have come up, who can potentially take over the baton and continue attaining the results that the Indian team has been achieving. Let us take a look at three such players who can be Kohli's successor as Test captain. 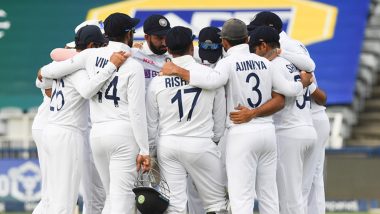 Virat Kohli's bombshell announcement of quitting Test captaincy clearly has not sunk in. It would indeed take some time for that to happen where it also has to be thought about who would be the next in line to take up the reins of the side. The Indian Test team has undoubtedly attained great heights in Test cricket in the past few years. From winning Test series in Australia twice, giving England a run for their money in their own backyard to making it to the inaugural World Test Championship final--Kohli's historic reign has unprecedentedly and shockingly come to an end and it is time for someone else to carry this legacy and the system forward. Virat Kohli Resigns As Team India's Test Captain, Says 'Have Done the Job with Absolute Honesty'

When MS Dhoni had announced his retirement from Tests in a similar shocking manner in 2014 midway into a tour of Australia, there were absolutely no two thoughts about who the next in line was. Kohli was the automatic pick and he has done a great job over all these years. Now, the situation is very different as many have been left scratching their hands as to who can be Kohli's potential successor. Amidst all the uncertainty in the air, let us take a look at three candidates who can fit the bill and try to lead the Test team from here on.

1) Rohit Sharma: Among all the different options that are hovering around social media and people's minds, Rohit Sharma is the most likely one. Why? Because he suits the role perfectly and it makes sense. Rohit is a proven leader, having attained success as a captain in the IPL and limited-overs cricket for India. He is one of the more senior statesmen on the team alongside Kohli. Also, he was slated to be India's new vice-captain for the South Africa Test series, but had to miss out with injury. So, when Kohli has resigned just after the series, it is only fitting that his deputy (in this case, Rohit) is elevated to the position of the captain. If Rohit is made Test captain, he would then have replaced Virat in all three formats as skipper, something that would continue Indian cricket's practice for the past decade or so of having one captain across formats. Virat Kohli Test Captaincy Record: A Look at Kohli’s Numbers As Skipper in Longer Format

2) KL Rahul: That KL Rahul is not a favourite for becoming the next Test captain of India is a fact which needs no hiding. The right-hander, who was Kohli's deputy in the South Africa Tests, has been tipped to succeed him as the full-time Test skipper. He led in the second Test which Kohli missed owing to a back spasm. Even BCCI chairman of selectors Chetan Sharma, while picking Rahul to lead India in the ODIs against South Africa, said that they are grooming him to be a future leader. Rahul is a favourite considering he is one of those who is an integral part of the side in all formats. Plus, he has been around for some time now to see and learn how things work as a skipper in international cricket. His IPL resume might not speak highly of his leadership skills though. If the BCCI were to name a new Test skipper after the South Africa ODIs, Rahul's performance as captain in the three-match series might just be an audition for the selectors to give a look at his skills as a captain.

3) Rishabh Pant: While discussing the prospect of who can be India's next Test captain, Rishabh Pant is a name that has popped up. Like Rahul, he too features for India as the first-choice wicketkeeper-batsman in all formats. Comparatively, Pant has had some success to show for himself as IPL captain, leading his side to a first-place finish in IPL 2021 before crashing out in the qualifier. Pant might be an interesting choice for captaincy. He is young, dynamic and can turn out to be something that a MS Dhoni was to the side. But having said that, Pant would perhaps need some time to be ready before being elevated as captain of a Test side like India. Picking him as the captain would be a gamble at this stage, considering the fact that he has many things left to learn as a leader in international cricket. Anushka Sharma Shares Touching Post After Virat Kohli’s Resignation from Team India Test Captaincy, Says 'Have Seen More Than Just Your Beard Turning Grey'

Another name that might be a good choice for captaincy is Ajinkya Rahane. Well, one must wonder--he was expectedly on his way out of the side owing to poor form and now, he has become one of the candidates to succeed Kohli and become captain! Well, one cannot deny the fact that India, under Rahane's leadership in Tests, have had some memorable moments, the most special of them being the Test series win last year when Virat Kohli was on paternity leave after the first game. To lift a team after they had been 36 all out and then to go on and win the series, takes some inspirational captaincy amongst other things. If Rahane would have had some form, his candidature for Test captaincy would have become more stronger, considering he has led the side whenever Virat was not around. Maybe give him the captaincy and a shot to resurrect his Test career?

(The above story first appeared on LatestLY on Jan 17, 2022 04:44 PM IST. For more news and updates on politics, world, sports, entertainment and lifestyle, log on to our website latestly.com).