Following RCB's maiden win of the season, in a video interview by teammate AB de Villiers, Virat Kohli opened up about his life post marriage to Bollywood actor Anushka Sharma. 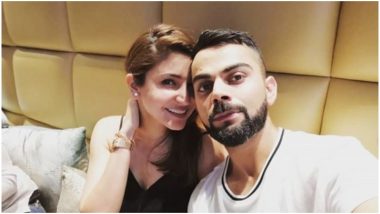 Following Royal Challengers Bangalore’s (RCB) maiden win of the season, in a video interview by teammate AB de Villiers, Virat Kohli opened up about his life post marriage to Bollywood actor Anushka Sharma. RCB captain, who tied the knot with Anushka in December 2017, said the presence of his wife Anushka has changed his whole world. No End to Funny RCB Memes Despite Virat Kohli and Co’s First Win of the IPL 2019.

“I think over the last more than a year or so, the best thing to have happened to me is me getting married. It's literally changed my whole world. I have the most beautiful wife, the most beautiful person,” Kohli said while talking to De Villiers for ipl20.com.

"That has been the most strong factor in my life to change the way I was. Before I was too intense in life and she (Anushka Sharma) always keeps me motivated, positive but at the same time we spend quality time with each other and totally get away from the game and that's the most important thing," the RCB skipper said. Enough of Funny RCB Memes! An Open Letter to Virat Kohli Haters From Royal Challengers Bangalore Fan.

"I think I couldn't have been more lucky to have someone like that who can understand my mindset being in that position herself. I look forward to spending time with her and that's how I switch off," he further added.

The celebrated batting duo, the men who share 2 double century stands for @RCBTweets - chat after a welcome win at Mohali! By @tanmoym. #KXIPvRCB

Meanwhile, RCB registered their first win of the Indian Premier League 2019 (IPL 2019) after six back to back defeats. RCB defeated KXIP by eight wickets after half-century each by Kohli and De Villiers. The Kohli-led side will now take on Mumbai Indians (MI) in an away game at the Wankhede Stadium in Mumbai.

(The above story first appeared on LatestLY on Apr 14, 2019 07:23 PM IST. For more news and updates on politics, world, sports, entertainment and lifestyle, log on to our website latestly.com).