Despite the victory, there is no end to funny RCB memes flooding the internet. 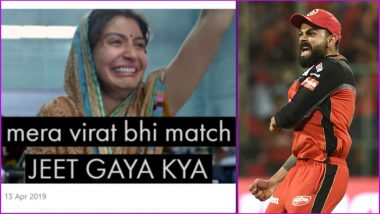 After six back to back defeats, Royal Challengers Bangalore (RCB) finally registered their first win of the Indian Premier League 2019 (IPL 2019) as they beat Kings XI Punjab (KXIP) at the Punjab Cricket Association IS Bindra Stadium in Mohali by eight wickets. Chasing 174, RCB reached the target in 19.2 overs and with it opened their account on the IPL 2019 points table. However, despite the victory, there is no end to funny RCB memes flooding the internet. KXIP vs RCB Highlights IPL 2019: Royal Challengers Bangalore Register First Win of the Season.

Fans trolling RCB before and after their game has become a norm now. However, the Virat Kohli-led side finally provided their fans something to cheer at. Had RCB lost this match as well, they would have become the first team to lose seven matches on the trot. Now that RCB have earned the two valuable points, fans all be hoping that the team doesn’t look back from here. Meanwhile, enjoy some of the funny RCB memes we found on the internet. Enough of Funny RCB Memes! An Open Letter to Virat Kohli Haters From Royal Challengers Bangalore Fan.

There but not there!

RCB finally win a match and still they are at the bottom of the table. #KXIPvRCB pic.twitter.com/KEbuKq3WuO

Back to defeat soon?

When I tell that RCB won the match, ppl be like :#KXIPvRCB#IPL2019 pic.twitter.com/rOMIskdzwQ

Despite Chris Gayle scoring unbeaten 99, RCB restored Kings XI to 173 for four. In response, Parthiv Patel and Virat Kohli added 43 runs for the first wicket inside four overs to help their side get off to a positive start. Patel was then dismissed and AB de Villiers joined Kohli in the middle.

Kohli and ABD then formed a match-winning 85-run stand for the second to take RCB close to the target. Kohli in the process notched his 37th IPL half-century and was dismissed in the 16th over. Marcus Stoinis and De Villiers then helped RCB cross the line. De Villiers finished unbeaten on 59 off just 38 balls while Stoinis chipped in with valuable 28 off 16 balls.

(The above story first appeared on LatestLY on Apr 14, 2019 12:25 AM IST. For more news and updates on politics, world, sports, entertainment and lifestyle, log on to our website latestly.com).