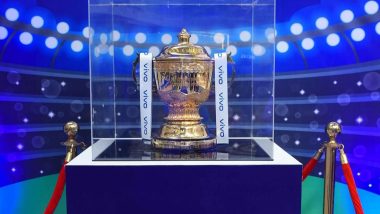 New Delhi, Aug 6: With 44 days left for the 13th edition of the Indian Premier League, the Board of Control for Cricket in India (BCCI) has decided to suspend the partnership with title sponsors Vivo. This comes after the IPL Governing Council had on Sunday decided to retain the company as title sponsors.

"The Board of Control for Cricket in India (BCCI) and vivo Mobile India Pvt Ltd have decided to suspend their partnership for Indian Premier League in 2020," BCCI said in a media release. IPL 2020 in UAE: Franchises Discuss Player Replacement, Title Sponsor & Logistics.

The move to retain Vivo on Sunday had seen a lot of backlash and there were even trends on social media about boycotting the league and the BCCI felt that it was in national interest to suspend the sponsorship deal as fan sentiments are a priority for the board.

Earlier on Monday, the Confederation of All India Traders (CAIT), which is spearheading a movement for boycott of Chinese goods, also criticised BCCI's decision to retain VIVO, the Chinese company, as IPL's title sponsor.

"We have sent a communication to Amit Shah and S. Jaishankar, demanding not to give approval to the BCCI for holding the IPL in Dubai," the CAIT said.

In the letter, CAIT national president B.C. Bhartia and secretary general Praveen Khandelwal said at a time when Chinese aggression on Indian borders gave rise to the anti-China sentiments in India, BCCI's decision was contrary to the broad government policy.

Citing the cancellation of events, like Olympics and Wimbledon due to the COVID-19 pandemic, they said the BCCI decision must be condemned. The BCCI's move reflected its greed for money, it said.

They also said the Centre had taken several steps to reduce the country's dependence on China, which included a ban on 59 Chinese apps, rejecting partnership of Chinese companies in railways and highway projects. Under such a scenario, BCCI's decision smacked of utter disregard for the government policy, involving Chinese companies, they said.

(The above story first appeared on LatestLY on Aug 06, 2020 03:55 PM IST. For more news and updates on politics, world, sports, entertainment and lifestyle, log on to our website latestly.com).