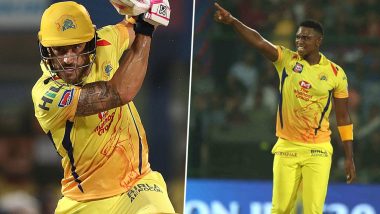 In order to start preparations for Indian Premier League (IPL) 2020, Chennai Super Kings (CSK) are scheduled to reach Dubai on August 21. The CSK squad including skipper MS Dhoni and Suresh Raina will travel via a chartered plane for the mega tournament. However, many major foreign players will miss the initial half of the training. Nevertheless, the South African duo of Lungi Ngidi and Faf du Plessis is likely to join the team on September 1 which will certainly give them a great chance to prepare for IPL 2020 which is slated to start on September 19. CSK Squad for IPL 2020 in UAE: Check Updated Players' List of Chennai Super Kings Team Led by MS Dhoni.

According to a report in Times of India, Faf du Plessis, who’s expecting the birth of his second child, will join the team on September 1. He’ll fly alongside his countryman Lungi Ngidi to UAE. On the other hand, all-rounder Shane Watson, head coach Stephen Fleming and batting coach Mike Hussey will arrive by August 22. Suresh Raina Prepares for IPL 2020, Dons Chennai Super Kings’ New Kit (Watch Video).

Speaking of other foreign players, Dwayne Bravo, Mitchell Santner and Imran Tahir might miss a couple of initial matches due to their participation in Caribbean Premier League (CPL) which is scheduled to end on September 10. While, Josh Hazlewood and Sam Curran are also set to miss initial matches as they are likely to participate in England vs Australia ODI series.

CSK's bowling coach Lakshmipathy Balaji said that the camp is being set up to regroup the team again."We will look to continue from where we left off in March. The key to success in the IPL is to perform collectively. Our aim will be to regroup as a team and start our preparations. But each player will have their own different routines and formula to prepare for the tournament. The idea is to give them enough space and freedom to understand their body and find their rhythm before coming together as a group," Balaji was quoted as per saying by TOI on Monday.

Well, the MS Dhoni-led side have won the title three times and it will be interesting to see if they can clinch their fourth trophy or not. Last year, they faced a narrow one-run defeat against Mumbai Indians in the finals. However, they’ll be determined to cross the final hurdle in UAE.

(The above story first appeared on LatestLY on Aug 11, 2020 11:06 AM IST. For more news and updates on politics, world, sports, entertainment and lifestyle, log on to our website latestly.com).