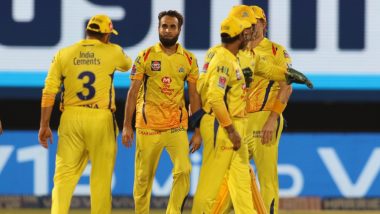 After Mumbai Indians (MI), Chennai Super Kings (CSK) is the most successful team in the Indian Premier League (IPL) history. While Mumbai have won record four IPL titles, Chennai have walked away with the honours in three seasons. The three IPL titles for Super Kings came in 2010, 2011 and 2018 and all under MS Dhoni’s captaincy. The wicketkeeper-batsman continues to lead the Chennai-based franchise, and the team will be eying their fourth title as IPL 2020 takes place in the United Arab Emirates (UAE). IPL 2020 Captains List: From MS Dhoni to Virat Kohli, Check Out Skippers of All 8 Teams in Indian Premier League 13.

IPL 2020 was earlier scheduled to start on March 29, but due to coronavirus pandemic, the league was postponed indefinitely. And now, with the cancellation of ICC T20 World Cup 2020 Board of Control for Cricket in India (BCCI) were provided with a window to hold the league.

CSK have retained the core of the players over the years and is one of the most experienced sides in the IPL 2020. Earlier at the IPL 2020 auction, Super Kings added former Kolkata Knight Riders (KKR) spinner Piyush Chawla, England’s Sam Curran, Australia’s Josh Hazlewood and R. Sai Kishore to their squad. IPL 2020: Check out Full List of Coaches & Support Staff of all Eight Teams for Upcoming Edition of Indian Premier League.

Last Season Recap: CSK made it to the finals last season but lost to Mumbai Indians. After losing to Mumbai in the Qualifier 1, CSK defeated Delhi Capitals in Qualifier 2 to make it to the summit clash. The Dhoni-led side had finished second on the points table at the end of the first round after winning nine out of 14 matches.

(The above story first appeared on LatestLY on Aug 08, 2020 05:37 PM IST. For more news and updates on politics, world, sports, entertainment and lifestyle, log on to our website latestly.com).