Punjab Kings skipper Mayank Agarwal has said that "adaptability" has been the key ingredient of the team's campaign in IPL 2022, adding that having players such as England batter Jonny Bairstow and young pace bowler Arshdeep Singh was enough to lift the mood in the team whatever be the circumstances. 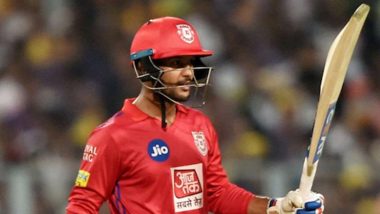 Mumbai, May 14: Punjab Kings skipper Mayank Agarwal has said that "adaptability" has been the key ingredient of the team's campaign in IPL 2022, adding that having players such as England batter Jonny Bairstow and young pace bowler Arshdeep Singh was enough to lift the mood in the team whatever be the circumstances. Punjab Kings have kept themselves alive in the tournament, thrashing Royal Challengers Bangalore by 54 runs on Friday after scoring a mammoth 209/9, built on fine half centuries from opener Bairstow (66 off 29 balls) and Liam Livingstone (70 off 66 balls). But the devastating batting by Baristow at the top of the order, with the England batter scoring at a searing strike rate of 227.58, set the tone for the massive total. RCB vs PBKS Stat Highlights, IPL 2022: Jonny Bairstow, Liam Livingstone and Bowlers Shine for Punjab Kings.

Agarwal credited Bairstow for the victory, saying, "We were very good with the bat. I thought we were brilliant. The wicket was holding up a bit. The way Jonny (Bairstow) and Livi (Livingstone) batted was simply amazing." He said that Punjab Kings had stuck to the batting approach as last year, adding that minor tweaks are made according to the situation and the wicket. "We haven't changed a lot to be really honest. It's just about understanding the situations and understanding the wicket. If a wicket doesn't allow us to get 200, we can't go out and play that kind of cricket. So we have to be adaptable and flexible, which we have been." PBKS Keep IPL 2022 Playoffs Chances Alive With 54-Run Win Over RCB.

On what kind of tactics he employs to counter the short boundaries, Agarwal said that in a tournament like the IPL, one cannot be "too defensive" in the approach while bowling, as that might be counterproductive in the long run. "It can get a little tough for a captain to do that (stopping boundaries and sixes at venues with short boundaries), but we can't be too defensive with the ball. As we have seen with the IPL, if a batsman gets going and gets set, no boundaries are long enough these days. But you still have to be smart with how you go about it and be aggressive with the ball." He added that Bairstow and Arshdeep were the livewires of the side. "Very, very energetic person (Arshdeep)... very confident guy. We can see that on the field. He enjoys his cricket and stays stress free. He's a leader on the team."

(The above story first appeared on LatestLY on May 14, 2022 11:56 AM IST. For more news and updates on politics, world, sports, entertainment and lifestyle, log on to our website latestly.com).