Earlier, Dhoni had himself confirmed that his last T20 game will be in Chennai. Notably, the franchises have to submit their lists of retained players by November 30 and there will be a mega auction after that with two new teams joining the league from the 2022 season. 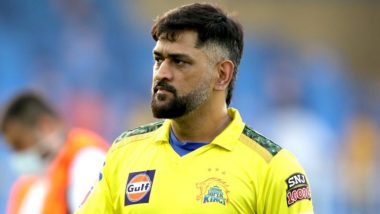 New Delhi, Nov 24 (IANS) Ahead of the mega auction, defending Champions Chennai Super Kings have decided to retain their talismanic captain Mahendra Singh Dhoni for the next three seasons of the Indian Premier League (IPL).

Apart from Dhoni, the franchise has retained all-rounder Ravindra Jadeja and opener Ruturaj Gaikwad, who played key roles in CSK 2021 IPL title win. As per BCCI rules, each team is allowed to retain a maximum of four players and four time champions are also in talks with England all-rounder Moeen Ali to come on board. Ali could be a useful player on the slow and turning track at Chepauk Stadium in Chennai, however, if he doesn't agree to stay, CSK will then retain another England cricketer Sam Curran as their fourth player, an Indian Express report said. MS Dhoni Confirms That He Will Play His Last T20 Game in Chennai During CSK’s ‘Champion’s Call’ Celebration (Watch Video)

Notably, the franchises have to submit their lists of retained players by November 30 and there will be a mega auction after that with two new teams joining the league from the 2022 season. Meanwhile, Delhi Capitals has decided to retain wicketkeeper-batsman Rishabh Pant, all-rounder Axar Patel, Prithvi Shaw and pacer Anrich Nortje. As per the report, Shreyas Iyer wanted to lead DC but the franchise was keen to have Pant as their leader going ahead, so the right-handed batsman decided to move on. It is also learnt that Mumbai Indians will retain Rohit Sharma, Jasprit Bumrah and Ishan Kishan and they are also in negotiations with their West Indies all-rounder Kieron Pollard. Five times champions also don't want to let go of Suryakumar Yadav and are planning to buy him from the auction pool.

IPL 2022 will be a ten-team affair and two new teams owners Sanjiv Goenka's RPSG group and CVC Capitals have approached a few top Indian players. India opener KL Rahul has parted ways with Punjab Kings and is likely to lead the new Lucknow team. Meanwhile, Kolkata Knight Riders are likely to retain their two all-rounders Sunil Narine and Andre Russell and mystery spinner Varun Chakravarty too. However, they are still deciding on whether to retain Shubman Gill or Venkatesh Iyer.

(The above story first appeared on LatestLY on Nov 25, 2021 03:21 PM IST. For more news and updates on politics, world, sports, entertainment and lifestyle, log on to our website latestly.com).