IPL 2022: Rashid Khan Thinks Team’s Belief in His Batting Abilities Is Working Wonders for Him

Rashid Khan the leg-spinner has been weaving his magic in IPL 2022, picking 18 wickets in 15 matches at an economy rate of 6.73 and leaving fans jaw-dropped with his 0/15 spell against Rajasthan Royals in Qualifier 1. 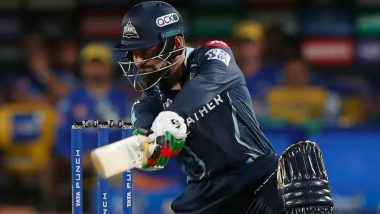 Ahmedabad, May 28: Rashid Khan the leg-spinner has been weaving his magic in IPL 2022, picking 18 wickets in 15 matches at an economy rate of 6.73 and leaving fans jaw-dropped with his 0/15 spell against Rajasthan Royals in Qualifier 1. But what has brought further attention for Rashid in the tournament has been his batting returns, seen from his 40 off 21 balls against Chennai Super Kings and 31 not out off just 11 balls against Sunrisers Hyderabad in the league stage. GT vs RR Dream11 Team Prediction IPL 2022: Tips To Pick Best Fantasy Playing XI for Gujarat Titans vs Rajasthan Royals Indian Premier League Season 15 Final.

Now, with Gujarat all set to play the final against Rajasthan on Sunday, Rashid revealed that confidence from the think-tank on him getting the 20-25 runs off his bat has been the key. From usually batting at eight, Rashid has been coming at either six or seven while inventing his signature stoke -- the snake shot. Though he has scored just 91 runs in eight innings, one can't ignore his whopping strike-rate of 206.81, which swells to 227.5 while coming at number seven.

"This year, I have batted a bit higher than I was batting before. The confidence has come from the coaching staff, the captain and all the players, they showed ability to perform and score; that's the kind of energy you need as a player. That has been given to me and other thing is that there is more batting practice for me, batting more than before. "The belief which everyone has on me that this guy can deliver and score some crucial runs for the team, has resulted in me believing that I can score those 20-25 runs for the team whenever they need," said Rashid in the pre-final virtual press conference.

"The kind of confidence needed was there and the opportunity you need as a player, you tend to think that you can deliver for the team and that's been behind performing more (with the bat) in the IPL. I am enjoying it and positive energy around you and when guys have believe in you, the performance automatically comes out," added Rashid. Rashid also credited middle-order batter David Miller's form, 449 runs in 15 matches at an average of 64.14 and strike-rate of 141.19, for providing the confidence to the side of chasing any target in the tournament. IPL 2022: Sanju Samson Reveals, He Was Playing an U-16 Game Somewhere in Kerala When RR First Won the Title in 2008.

"Someone like him with a positive mindset and with the bowling unit, you don't have that kind of pressure as well. Sometimes you feel that target is high and think about it a lot. We have chased 190-plus couple of times, which is a great sign and it's great to have David, someone who's in-from at the middle, is quite important in T20 cricket that someone like him at that position is making scores. It makes the job of top-order easy as they have that believe in him." "Also, Rahul (Tewatia) at the end, that's really helped the team. Number four, five and six are very important positions in T20 cricket and if all three are in form, it helps in winning maximum games. It doesn't matter what the target is, as long as they are in form, their scores are very crucial that time.

"Especially if you see the game against CSK (where Miller scored 94 not out in a chase of 170), we lost three-four wickets upfront and David then brought out an innings which showed his class, which gives a team positive energy." Rashid felt that his mindset with the ball won't change for the final and plans to stick to his usual gameplans in the clash for the trophy. "I don't have anything in me which says I will go into the playoffs with a different mind and play other matches with a different mindset. In every game, you go with the same confidence, mindset and energy. But in the playoffs, teams try to take little risks and play better when things are on the safe side.

"But my mindset doesn't change; I always look to bowl tight and bowl well as it helps the bowlers from other end automatically to take risk and get a chance to pick a wicket. My job, whether it's a league match or a final, is to go with the mindset of bowling confidently in my areas and try not to do anything different. I do well economy wise despite not getting much wickets but I try to build up the pressure so that a wicket comes from the other end."

(The above story first appeared on LatestLY on May 28, 2022 04:17 PM IST. For more news and updates on politics, world, sports, entertainment and lifestyle, log on to our website latestly.com).