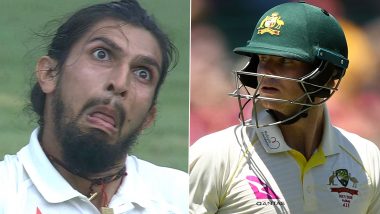 Veteran pacer Ishant Sharma is one of the best bowlers to have represented India in Test cricket and his record speaks volumes of his prowess. Along with his bowling capabilities, however, the tall and lanky pacer is known for his aggressive nature and on numerous occasions, Ishant has got involved in a verbal battle on the field. Arguably, his most famous of-field episode was with Steve Smith during the India vs Australia Test at Bengaluru in 2017. In order to distract the former Aussie skipper, the speedster mocked him with a bizarre facial expression which turned to be a great meme material for the netizens. Pat Cummins Fires Warning to Virat Kohli-led Team India Ahead of India vs Australia 2020, Says ‘We’ll Be Ready for Them This Time’.

Recalling that game, Ishant revealed that he was carried away by the emotions in the match as the dismissal of in-form Smith could have been a massive boost for the home side. “It was a close game. Bhavnaaon mein behke aadmi kuch bhi karta hai (People do all sorts of things when driven by emotions),” the India quick told Mayank Agarwal while featuring in BCCI’s latest show ‘Open Nets With Mayank.’

“We had lost the Pune Test, and the series was on the line. The wicket on Bengaluru had its ups-and-downs. You try your best to upset the batsman. He was playing, and doing all sorts of things. I tried my best to upset him. I knew if I could get his wicket, we can win the match. So, I was trying to get him out of his comfort zone. I knew if he became comfortable, he could win the match,” Ishant added.

Well, Ishant wasn’t able to account Smith’s wicket in that game. However, the right-handed batsman couldn’t fire either as he registered the scores of 8 & 28 as Virat Kohli and Co won the game by 75 runs and levelled the series 1-1.

Earlier in 2015, Ishant alongside the then Sri Lanka captain Dinesh Chandimal faced a one-match ban which forced the talismanic pacer to miss the first Test against South Africa at home. However, Ishant revealed that he always had the backing of skipper Virat Kohli for his aggressive approach on the field.

“He is an aggressive captain; he loves it when you show aggression and he doesn’t tell you anything for that. He always says just get me the wicket and do whatever you want. He just tells me not to get banned. So, when I was banned in Sri Lanka he came again and said do everything you want but just don’t get banned,” opined the 31-year-old.

(The above story first appeared on LatestLY on Jun 01, 2020 09:40 AM IST. For more news and updates on politics, world, sports, entertainment and lifestyle, log on to our website latestly.com).