Pat Cummins Fires Warning to Virat Kohli-led Team India Ahead of India vs Australia 2020, Says ‘We’ll Be Ready for Them This Time’ 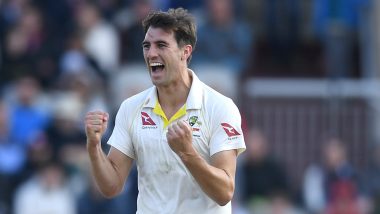 The last time when India and Australia met each other Down Under in 2018-29, Virat Kohli and team walked away with a series win for the first time in the history. Team India stunned Virat Kohli and company in their own backyard and thus scripted history. Needless to say that the future contests held down under will also be intense. Australia once again is set to host India but the COVID 19 has sent the cricketing schedule for a toss. However, if the two teams meet again, the battle would be no less than a clash of titans. Now, Australian pacer Pat Cummins has fired a warning for the Indian team ahead of the series and said that they are ready for Virat Kohli-led team. India Tour of Australia 2020-21: Adelaide Oval Hotel Could Serve As Quarantine Base for Indian Team Ahead of the Series.

During an interview, Cummins told Cricket Australia that they have learned their lessons on how brutal Test cricket can be. He also said that they have an upper hand with the return of David Warner and Steve Smith who were serving a ban due to the ball-tampering scandal in 2018-19. “I think we’ll be ready for them this time. Everyone’s a little more experienced this time because obviously we’ve got a couple of class batters back in the side (Steve Smith and David Warner) and someone like Marnus (Labuschagne) has played a bit more and done brilliantly,” he said.

Talking about India's stint Down Under in 2018-19, Virat Kohli and team won the three-match Test series by 2-1. They won the first and the third game in the series. However, Virat Kohli and company lost the second game convincingly.

(The above story first appeared on LatestLY on May 24, 2020 10:44 AM IST. For more news and updates on politics, world, sports, entertainment and lifestyle, log on to our website latestly.com).