Ishan Kishan had quite a moment when he spotted Sachin Tendulkar in the dressing room. As soon as he noticed Master Blaster in the dressing room, Kishan removed his bag and headphones and greeted him with a smile. The video of the incident is making rounds on social media. 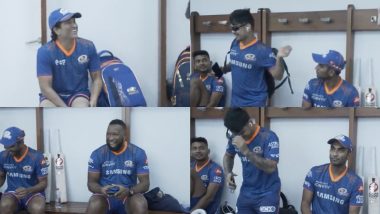 With the kind of career, Sachin Tendulkar has had, it is quite obvious that he is respected by the youngsters and the veterans too. As of now, Master Blaster is a part of the Mumbai Indians and is their mentor for the IPL 2021. Obviously, he is travelling with the team to UAE and Dubai. So during one of these days, he was spotted in the dressing room and we had Ishan Kishan who had quite a moment with the Master Blaster. As soon as he saw the former Indian cricketer in the dressing room, the wicketkeeper removed his bag and also his headphones. His teammates Keiron Pollard and others were left in splits. The video of the incident is making rounds on social media. IPL 2021 Points Table Updated: CSK Secure Playoff Berth, SRH Out Of Contention.

Ishan  Kishan has not had a very good outing in the IPL 2021 so far. In fact, his performance in the season has been far short of impressive. So far from eight games, the Mumbai Indians wicketkeeper has only scored 108 runs. In this season, his highest score has been 29 runs and the fans are keeping their fingers crossed for the Indian youngster to regain his form soon. Not very long ago, RCB captain Virat Kohli was also seen consoling the wicketkeeper batsmen after his poor outing against Royal Challengers Bangalore. For now, check out the video of Ishan Kishan's gesture when he spotted Sachin Tendulkar.

That Unexpected moment, When Student Saw Principal at Class 💙😁 pic.twitter.com/EK3NZ8HR4e

For now, Mumbai Indians is hunting for a win to secure their place in the playoffs. As of now, they are placed on number five of the IPL 2021 points table with 10 points in their kitty.

(The above story first appeared on LatestLY on Oct 01, 2021 11:04 AM IST. For more news and updates on politics, world, sports, entertainment and lifestyle, log on to our website latestly.com).