Team India have lodged an official complaint with the match officials after a number of drunk fans directed racial abuse towards pacers Mohammed Siraj and Jasprit Bumrah during the 3rd Test between India and Australia at the Sydney Cricket Ground (SCG). 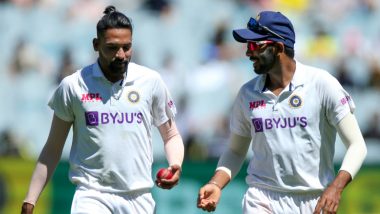 Indian pacers Mohammed Siraj and Jasprit Bumrah were racially abused by a section of supporters during the 3rd Test between India and Australia at the Sydney Cricket Ground (SCG). Team India have lodged an official complaint with the match officials after a number of drunk fans directed racial abuse towards the cricketers. India vs Australia 3rd Test 2021 Day 3 Stat Highlights: Pat Cummins, Marnus Labuschagne Put Hosts in Command.

It is understood that the matter was brought to the attention of the match officials at the end of the third day's play when a bunch of senior players including captain Ajinkya Rahane and R Ashwin spoke to the umpires Paul Reiffel and Paul Wilson. There was a discussion between the umpires, security officials and the Indian players for close to five minutes after the close of play.

The incident happened during the final session of Day 3 when Mohammed Siraj was fielding at fine leg near the boundary ropes at the Randwick end of the SCG. According to reports, Jasprit Bumrah was also one of the players from the Indian team who was subjected to racial abuse from the supporters. There has been no official statement from the Indian or the Australian board yet.

Speaking of the game, Australia have the upper hand at stumps on Day 3 as the hosts are currently playing on 103/2 and lead the game by 197 runs. Steve Smith and Marnus Labuschage have stitched up a 68-run partnership together with the latter closing in on another half-century in the match.

(The above story first appeared on LatestLY on Jan 09, 2021 04:17 PM IST. For more news and updates on politics, world, sports, entertainment and lifestyle, log on to our website latestly.com).