Kedar Jadhav Birhday Special: A Look at Some Remarkable Performances by Indian All-Rounder

Making his IPL debut for Delhi Daredevils (now Delhi Capitals) in 2010, Jadhav scored a 29-ball 50 against Royal Challengers Banglore and announced his arrival in style. However, he wasn't able to deliver consistently and finally made his ODI debut in 2014. He played some brilliant knocks. However, his bowling capabilities were unlocked at the highest level. 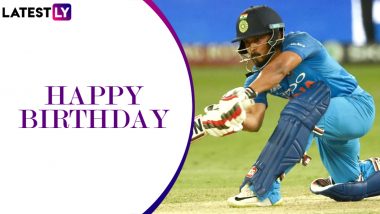 Indian all-rounder Kedar Jadhav rings his 35th birthday on March 26, 2020. Hailing from Pune, the right-handed batsman has been a regular in India's ODI line-up and has guided his side to victories on numerous occasions. Jadhav possesses the ability to score quick runs in the death overs and his off-spin with a slinging action has proved to a headache for many prominent batsmen. Below, we'll look at times when Jadhav put on a match-defining show. 21-Day Lockdown in India Puts IPL 2020 on the Brink of Cancellation.

Making his IPL debut for Delhi Daredevils (now Delhi Capitals) in 2010, Jadhav scored a 29-ball 50 against Royal Challengers Bangalore and announced his arrival in style. However, he wasn't able to deliver consistently and finally made his ODI debut in 2014. He played some brilliant knocks. However, his bowling capabilities were unlocked at the highest level and he delivered some match-defining spells too. Meanwhile, let's have a look at his best performances.

105* Against Zimbabwe in Harare

India's top-order tumbled during the 3rd and last ODI against Zimbabwe in 2015 series. However, Jadhav came into bat at number six and looked in brilliant knick. Playing just his 4th ODI match, the right-handed batsman paced his innings to perfection and brought the Indian innings back on track. He went on to scored a magnificent ton as the Men in Blue piled up 276 runs in the first innings. In reply, Zimbabwe wasn't able to put on a fight and lost the match by 83 runs.

During New Zealand's 2016 Tour of India, Jadhav's bowling skills came out of his arsenal and he kept taking wickets throughout the series. His best performance, however, came in the third ODI. Batting first, the Kiwis got off to a brilliant start but MS Dhoni gave the ball to Jadhav and the course of the match was changed. He dismissed Tom Latham, skipper Kane Williamson and Corey Anderson as the visitors were packed for 285 runs. In reply, Virat Kohli scored a brilliant hundred and guided the Men in Blue to a seven-wicket triumph.

120 Against England in Pune

Another Kedar Jadhav special was witnessed during the 1st ODI of England's 2017 Tour of India. Chasing a mammoth target of 351, India were reduced to 4/63. Just when the outcome looked inevitable, Jadhav along with skipper Virat Kohli stitched a brilliant partnership and changed the course of the match. Jadhav was particularly aggressive as he unleashed an absolute carnage. He ended up scoring 120 off 76 deliveries and riding on his stellar show, India won the match by three wickets.

3/23 Against Pakistan in Dubai

An Indo-Pak clash is always a high-voltage encounter and every player of either side wants to do well in this game. Well, Jadhav managed to do so during Asia Cup 2018. With Pandya sustaining an injury in the middle of the game, Jadhav had the onus to bowl the rest of the overs and he didn't disappoint. The off-spinner just didn't contain runs but also took three crucial wickets. As a result, the Men in Green were bundled out for 162 runs and later, India comfortably won the match by eight wickets.

(The above story first appeared on LatestLY on Mar 26, 2020 08:10 AM IST. For more news and updates on politics, world, sports, entertainment and lifestyle, log on to our website latestly.com).