A look at Kolkata Knight Riders (KKR) team for IPL 2019 along with their schedule. 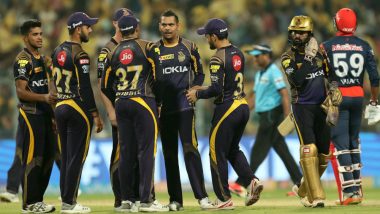 Two-time IPL winning side Kolkata Knight Riders will once again be counted as one of the favourites to lift the title this year. The Shah Rukh Khan and Juhi Chawla owned side have made the playoffs in the last three editions of the IPL but failure to convert it into a finals appearance is what has hurt the fans. Jacques Kallis who is a former player of KKR will once again manage the team with former Australian batsman Simon Katich his deputy. Under Kallis’ guidance, the team won 8 of the 14 games they played last season which can be considered good. IPL 2019 Schedule in PDF: Download VIVO Indian Premier League 12 Full Timetable With Fixtures, Matches, Team and Venue Details.

Dinesh Karthik is the captain of the franchise with Robin Uthappa his deputy. Both the players have rich experience of playing T20 cricket and can motivate the players by leading with example. They have got in Caribbean all-rounder Carlos Brathwaite for a fee of 5 crores and he does pack a punch when playing the shorter version of the game. He will join compatriot Sunil Narine and Andre Russell who have star performers in the IPL for several seasons now. In terms of domestic players, Shubham Gill and Nitish Rana have done well in domestic cricket and KKR will be relying on them to deliver.

The brand value of KKR was estimated at $ 99 million back in 2017 which made them second in terms of IPL teams. Shah Rukh Khan is a master when it comes to building the brand image and he has done the same with his team. The players can be seen promoting several products throughout the IPL campaign and their slogan of ‘Korbo Lorbo Jeetbo’ is also a major hit with fans. The franchise has also invested in the team in South Africa and West Indies namely – Trinbago Knight Riders and Cape Town Knight Riders. Kolkata Knight Riders Tickets for IPL 2019 Online: Price, Match Dates and Home Game Details of KKR in Indian Premier League 12.

Their strength clearly lies in the presence of West Indies cricketers- Sunil Narine, Carlos Brathwaite, and Andre Russell. All three are equally adept with both bat and bowl and with them in the team, it is very difficult to overlook even one of them. We all know the heroics of Brathwaite against England in the 2016 World T20 final while Sunil Narine has emerged as an opener in the last few seasons known for his big hitting up top. Andre Russell will come in the middle order and is a wicket-taking option throughout his four-over spell.

Lack of quality fast bowlers is an issue the KKR have to deal with throughout the campaign. Shivam Mavi and Kamlesh Nagarkoti have little experience of playing in the IPL. Mavi went for plenty in the games he played last season. Andre Russell and Carlos Brathwaite are more of batting all-rounders and they could be under pressure if the domestic fast bowlers don’t contribute enough. KKR Team in IPL 2019: List of Kolkata Knight Riders Players for Indian Premier League 12 After Auction.

(The above story first appeared on LatestLY on Mar 13, 2019 01:40 PM IST. For more news and updates on politics, world, sports, entertainment and lifestyle, log on to our website latestly.com).