The win took Rajasthan to the second spot in the points table with 16 points, the same as Lucknow Super Giants, but with an inferior net run rate. Hooda and Pandya kept Lucknow's hopes alive as they stitched a good partnership. But the rate of scoring was not as high as they would have loved and LSG was always playing the catch-up game. 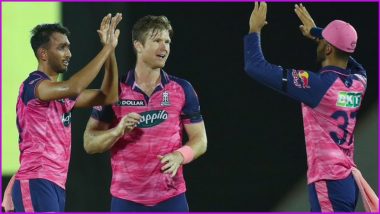 Deepak Hooda's fighting half-century went in vain as Lucknow Super Giants kept losing wickets at regular intervals against clinical bowling by Rajasthan Royals to eventually lose by 24 runs in Match 63 of the IPL 2022 at the Brabourne Stadium. Chasing 179 for a victory that would have secured them the second spot in the points table, Lucknow were in trouble at 29/3 in the 6th over after Trent Boult sent back Quinton de Kock and Ayush Badoni off successive deliveries. Though Lucknow survived the hat-trick ball, Hooda (59 off 39 balls) came to their rescue as he held one end up, raising 65 runs for the fourth wicket partnership with Krunal Pandya (25 off 23 balls), they could manage 154/8 in 20 overs, losing their second successive match. IPL 2022 Points Table Updated With NRR: Rajasthan Royals Topple Lucknow Super Giants, Jump to Second Place.

The win took Rajasthan to the second spot in the points table with 16 points, the same as Lucknow Super Giants, but with an inferior net run rate. Hooda and Pandya kept Lucknow's hopes alive as they stitched a good partnership. But the rate of scoring was not as high as they would have loved and LSG was always playing the catch-up game.

After Pandya was out to an excelled relay catch by Riyan Parag after Jos Buttler had pouched the ball at long-off and threw it up in the air before falling over the boundary rope. Parag completed the catch off Ravi Ashwin as Lucknow Super Giants slumped to 94/4 in the 14th over.  Meanwhile, check out stat highlights from LSG vs RR: Rajasthan Royals Move Closer to Playoffs Spot, Beat Lucknow Super Giants; Move to Second Spot on IPL 2022 Points Table.

# First time LSG have lost back to back matches this season.

# This was RR's second win over LSG in as many matches.

Hooda, who struck Yuzvendra Chahal for a six and four off successive deliveries in the 11th over and had pulled a short one on leg-side by Obed McCoy for a six earlier in his innings, kept plugging for runs as he kept Lucknow Super Giants in the hunt despite the soaring asking rate. He completed his half-century off33 balls, hitting four boundaries and two sixes.

Hooda was out trying to shore up the scoring as he jumped out to Chahal and Rajasthan skipper Sanju Samson completing the stumping despite a fumble. Hooda was out for 59 off 39 deliveries, hitting five boundaries and two sixes. Lucknow needed 63 runs off 24 balls and the task got further difficult with the fall of each wicket as Rajasthan Royals bowled and fielded well.

From 63 off 24 balls, LSG progressed to 34 off the last six deliveries and Marcus Stoinis (27) hammered Prasidh Krishna for a six off the first ball but holed out to the next, ending their hopes. Trent Boult was the best Rajasthan bowler on the day with 2/18 off four overs while Prasidh Krishna (2/33) and Obed McCoy 2/35 were also among wickets. Rajasthan's par score of 178/6 in 20 overs was built on useful knocks by Yashasvi Jaiswal (41 off 29 balls), skipper Sanju Samson (32 off 24), and Devdutt Padikkal (39 off 18), who got starts but could not go on to score a big one.

(The above story first appeared on LatestLY on May 16, 2022 12:19 AM IST. For more news and updates on politics, world, sports, entertainment and lifestyle, log on to our website latestly.com).