Michael Holding Lashes Out at Jofra Archer for Breaking the Bio-Secure Bubble, Says ‘I Have No Sympathy at All’ 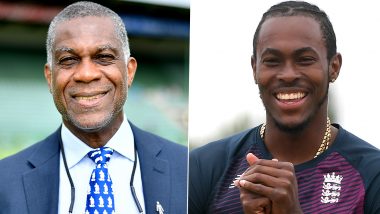 Manchester, July 16: West Indies great Michael Holding didn't hold himself back as he slammed England fast bowler Jofra Archer for breaking the bio-secure bubble ahead of second Test of #raisethebat series at Old Trafford. Archer, who scalped three wickets in the Southampton Test which England lost by four wickets, was omitted from the squad to face West Indies in the crucial Manchester Test. Citing example of Nelson Mandela, Holding ripped into Archer, stating sacrifices should be made for the larger good.

"I have no sympathy at all. I don't understand why people can't just do what is required. Talking about sacrifices -- Nelson Mandela spent 27 years in a little cell and he did nothing wrong -- that is a sacrifice," Holding told Sky Sports. Holding also questioned the protocols put in place by the England and Wales Cricket Board (ECB) and stated it should be more 'logical'. It is being reported that Archer drove to his home in Sussex as other players made their way to Manchester from Southampton. Jofra Archer’s Old Tweet About Jermaine Blackwood Goes Viral After West Indian Batsman’s Brilliant Outing Against England on Day 5 of 1st Test 2020.

"I just want to ask a few questions of the ECB and these protocols, though. I understand that protocols should be put in place but they should be a little bit more logical," Holding said. "Why aren't the England team travelling on a bus? If they have already passed the Covid test and everyone is together, they have six matches and are moving from one venue to another, why aren't they just all on a bus?

"Why are they allowed to travel by car? People need to just think a bit," he added. Former England cricketer Michael Atherton was also very critical of Archer's actions and stated it has not only put England's chances of a comeback into disarray but also put everyone's safety in jeopardy.

"It's very foolish for a number of reasons. One, it cost him a place in the team. Secondly, it's thrown England's plans into disarray, a vital Test match that they must win to try and win this series," Atherton told Sky Sports.

"And thirdly it's put at risk all the work that ECB have done. These six Test matches, three against West Indies, three against Pakistan, they've had to do a tremendous amount of work to get these games on."

Archer will now commence five days of isolation and will undergo two COVID-19 tests in this period, which have to test negative before his self-isolation period is lifted, England and Wales Cricket Board (ECB) said in an official statement.

(The above story first appeared on LatestLY on Jul 16, 2020 06:30 PM IST. For more news and updates on politics, world, sports, entertainment and lifestyle, log on to our website latestly.com).