Mohammed Siraj’s father passed away due to a lung ailment on November 20 (Friday). Siraj, who is currently in Australia training with India national team, reportedly heard the sad news of his father’s demise after a practise session. His father was 53-year-old at the time of his death and had been battling a lung infection. 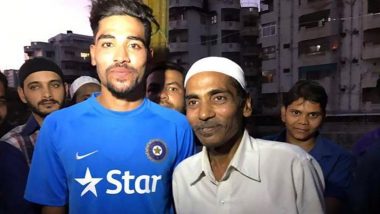 Team India and Royal Challengers Bangalore pacer Mohammed Siraj’s father passed away due to a lung ailment on November 20 (Friday). Siraj, who is currently in Australia training with India national team, reportedly heard the sad news of his father’s demise after a practise session in Sydney. His father Mohammed Ghouse was 53-year-old at the time of his death and had been battling a lung infection. Siraj, 26, is part of India’s Test squad for the 2020-21 Australia series. Virat Kohli on Paternity Leave: VVS Laxman Extends Support to Indian Skipper, Says ‘We Have to Respect the Decision’.

Siraj, however, won’t be able to attend the last rites of his father due to the COVID-19 pandemic, travel restrictions and the quarantine rules in both India and Australia.  “My dad's wish was always this - mera beta, desh ka naam roshan karna (my son, you should make my country proud). And, I will do that for sure,” the RCB pacer told Sportstar from Sydney. “I know what kind of hardship my dad faced in my early days driving an auto-rickshaw to let me pursue my passion for the game. It is shocking. IND vs AUS Series 2020-21: Glenn Maxwell Says ‘Poor IPL Run Won’t Affect My Performance Against India’.

“I lost the biggest support of my life. It was his dream to see me play for the country and I am glad that way I could realise that and bring joy for him. The coach Shastri Sir and captain Virat Kohli were informed about the news. They just told me to be bold and are lending all the support,” added Siraj who had lost his elder brother when he just seven.

Siraj's father had reportedly been suffering from the lung ailment for quite some time and had been admitted to a hospital in Hyderabad a month ago. He sadly passed on Friday.

Siraj, meanwhile, earned his maiden call up to the India Test squad after impressive performances in IPL 2020. The 26-year-old pacer took 11 wickets in just nine matches for RCB in season 13 of the Indian Premier League (IPL) with the highlights being the 3/8 he claimed against Kolkata Knight Riders (KKR). Siraj stunned KKR by exploiting the conditions and swinging the ball to leave the two-time IPL champions tattering at the start of their innings. He bowled two maidens in the match, making him the first-ever in IPL history to bowl two maiden overs in a single Indian Premier League match.

(The above story first appeared on LatestLY on Nov 20, 2020 08:11 PM IST. For more news and updates on politics, world, sports, entertainment and lifestyle, log on to our website latestly.com).