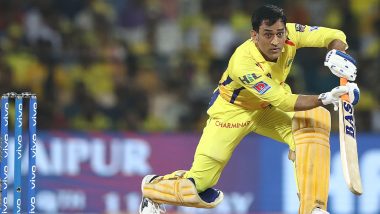 Former Indian captain and a cricket legend Mahendra Singh Dhoni celebrates his 39th birthday. Wishes and tributes have flowed from all around the world for captain cool on his special day but none like the wish from Dhoni’s own franchise Chennai Super Kings (CSK). The Chennai-based IPL franchise, who Dhoni has led to three IPL titles, has released a song ‘Mahi Ve’ to celebrate the birthday of their captain and Thala. The song was released as part of CSK’s ‘The Mahi Way’ series with the exclusive song ‘Mahi Ve’ sung by two fans in Hindi and Thamizh. ‘MS Dhoni Is World-Beater’, Dwayne Bravo Releases Song for Former Indian Captain on His 39th Birthday (Watch Video).

The song, which starts with “Khawaab Sau Hai Yahaan, Tu Hain Kahaan; Ummeedh Ki Roshni, Aur Dil Ki Shaan (a hundred wishes, where are you; a ray of hope and light of soul), was released by the franchise on its official twitter handle to celebrate Dhoni’s 39th birthday. “Thala...what a man, what a journey! The Mahi Way brought to you with an exclusive song 'Mahi Ve' in Hindi and Thamizh!” the tweet from the franchise read.

Thala...what a man, what a journey! The Mahi Way brought to you with an exclusive song 'Mahi Ve' in Hindi and Thamizh! #HappyBirthdayDhoni #WhistlePodu @msdhoni 🦁💛 pic.twitter.com/ps1TpL6QZQ

The lyrics of the song, which has been composed, written and performed by CSK fans Adil and Vaja, was also released on twitter by the franchise. The tweet also informed that the song is being played throughout the day on Chennai's Fever FM 91.9.

Here's the Lyrics of Mahi Ve

'Mahi Ve' was performed and composed by Super Fans Adil and Vaja. The song has been playing through the day on Chennai's Fever FM 91.9. Do tune in. The #yellove'ly lyrics: pic.twitter.com/OSVBxwC4TX

Earlier, West Indies all-rounder and CSK teammate Dwayne Bravo had also released a song titled “Helicopter 7” to celebrate the CSK captain’s birthday. The song highlights everything Dhoni has achieved in his career, which includes the World Cup, Champions Trophy and also three IPL titles. Bravo used some footages of Dhoni in his video to pay his tributes to the former captain.

(The above story first appeared on LatestLY on Jul 07, 2020 07:05 PM IST. For more news and updates on politics, world, sports, entertainment and lifestyle, log on to our website latestly.com).