MS Dhoni created a world record for himself as India went on to beat South Africa by six wickets. 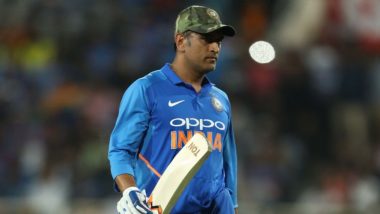 Kumar Sangakkara stands on number one with 54 stumpings in the World Cup. Adam Gilchrist stands on number two with 52 stumpings in the mega event. Yesterday MS Dhoni implemented the stumping of Andile Phehlukwayo in the 40th over and now has 139 first class stumpings in list A cricket. He also went on to equal the record of Pakistan’s Moin Khan. IND vs SA, CWC 2019 Stat Highlights: Rohit Sharma, Yuzvendra Chahal Shine As All-Round India Hand South Africa Six-Wicket Defeat.

Talking about the game yesterday, India won the game by six wickets as they chased a total of 228 runs. It was Jasprit Bumrah who chipped in with a couple of early wickets and got rid of the openers Hashim Amla and Quinton de Kock. Yuzvendra Chahal snapped four vital wickets and further dented the South African side. Rohit Sharma scored an unbeaten knock of 122 runs and drove India to victory. Virat Kohli and men will next play against Australia on June 9, 2019, at The Oval in London.

(The above story first appeared on LatestLY on Jun 06, 2019 04:32 PM IST. For more news and updates on politics, world, sports, entertainment and lifestyle, log on to our website latestly.com).