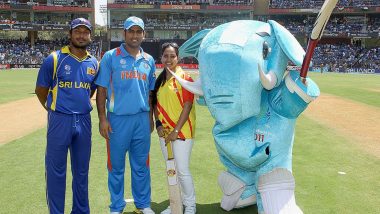 Former Sri Lankan captain Kumar Sangakkara has opened up about the toss controversy that happened during the final of ICC Cricket World Cup 2011 between India and Sri Lanka at the Wankhede Stadium in Mumbai. The toss had to take place twice as there was some confusion between Sangakkara and MS Dhoni due to the crowd noise. Speaking during an Instagram Live chat with Ravichandran Ashwin on his latest episode of ‘Reminiscence with Ash’, Sangakkara opened up about the incident. MS Dhoni Has Earned Right to Retire ‘On His Own Terms’, Says Former India Coach Gary Kirsten.

“The was crowd was huge. It never happens in Sri Lanka. Once I had this at Eden Gardens when I could not talk to the first slip and then of course at the Wankhede. I remember calling on the toss then Mahi wasn’t sure and said did you call tail and I said no I called head,” Sangakkara said.

“The match referee actually said I won the toss, Mahi said he did not. There was a little bit of confusion there, and Mahi said let’s have another toss of the coin and heads went up again,” he added. MS Dhoni Lacked Intent During India vs England ICC Cricket World Cup 2019 Match, Claims Ben Stokes in his Book.

After all the confusion, Sri Lanka won the toss and opted to bat first. Mahela Jayawardene scored unbeaten 103 as Sri Lanka posted 274 in their quota of 50 overs. India eventually won the match by six wickets with Dhoni hitting the famous six.

(The above story first appeared on LatestLY on May 29, 2020 01:45 PM IST. For more news and updates on politics, world, sports, entertainment and lifestyle, log on to our website latestly.com).