PAK vs ZIM 5th ODI: Imam-Ul-Haq Smashes His Third Century of the Series Against Zimbabwe

Interestingly, Imam-ul-Haq, who made his ODI debut last year in October against Sri Lanka has in nine innings managed to score four centuries. 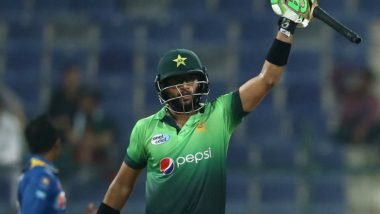 Pakistan continued their dominance over Zimbabwe in the fifth and final One-Day International (ODI) at the Queens Sports Club in Bulawayo. Having already won the series and leading it by 4-0, Pakistan once again displayed a solid performance in the batting. Openers Fakhar Zaman and Imam-ul-Haq, after Pakistan elected to bat first, added 169 runs for the first wicket. While Fakhar was dismissed on an individual score of 85, Imam went to notch his ODI career’s fourth century. PAK vs ZIM 5th ODI Live Score.

In fact, the 22-year-old opening batsman registered his third century of the series against Zimbabwe. Imam scored 128 in the opening ODI and then slammed 113 in the fourth ODI. In the second game of the series, Imam scored 44 before being removed for a duck in the third ODI. Interestingly, Imam, who made his ODI debut last year in October against Sri Lanka has in nine innings managed to score four centuries.

The left-handed opening batsman’s conversion rate from fifty to century stands at 100 percent thus far. And also during the fourth ODI, he shared a record opening partnership with Fakhar. Imam happens to be the nephew of former Pakistan captain and chief selector Inzamam-ul-Haq. No wonder from where he got his batting genes! Fakhar Zaman Becomes Fastest Batsman to Score 1000 ODI Runs, Reaches Landmark in 18 Innings.

Imam is off to a great start in the international cricket and he already has a Test half-century under his belt. Given Fakhar’s aggression, Imam compliments him well with his defensive and solid approach. Pakistan has had a problem with the openers for quite a long time and looks the team has found a suitable pair. However, Imam will have to pass the test against the quality bowlers which the Zimbabwe missies out on.

(The above story first appeared on LatestLY on Jul 22, 2018 03:56 PM IST. For more news and updates on politics, world, sports, entertainment and lifestyle, log on to our website latestly.com).