Pakistan vs Bangladesh 2020: Mushfiqur Rahim Unwilling to Tour PAK for Tests and T20Is 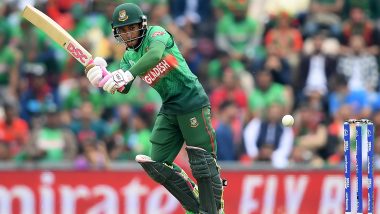 The uncertainty over Bangladesh’s tour of Pakistan in January-February 2020 is growing day by day. Pakistan are scheduled to host Bangladesh for two Tests and three T20Is. However, Bangladesh is unwilling to tour Pakistan due to security issues. Pakistan Cricket Board (PCB) have been trying their best to convince Bangladesh, but thus far nothing has proved fruitful. As per some reports, Bangladesh has agreed to play the only T20Is in Pakistan and are hesitant in playing Tests. Cricket Matches in January 2020: India vs Sri Lanka, South Africa vs England, West Indies vs Ireland and Full Schedule of Other Series.

Pakistan, on the other hand, have refused to host Bangladesh for Test series at a neutral venue and even rejected Bangladesh’s proposal to play one Test in Pakistan and the other in Dhaka. Meanwhile, reports have emerged that Bangladesh’s senior cricketer Mushfiqur Rahim is not willing to tour Pakistan.

Bangladesh Cricket Board (BCB) has sought the consent of cricketers for the upcoming tour of Pakistan. And as per some reports, Mushfiqur is among players who have refused to tour Pakistan.

The two-match Test series between Pakistan and Bangladesh is also part of the ICC World Test Championship. Meanwhile, BCB is expected to take the final decision on January 12 following their board meeting.

Pakistan recently hosted Sri Lanka for a two-match Test series. The Tests were held in Rawalpindi and Karachi. Interestingly, following the Lahore attack in 2009 on the Sri Lankan team, Sri Lanka became the first Team to tour Pakistan for a Test series.

(The above story first appeared on LatestLY on Jan 08, 2020 10:29 AM IST. For more news and updates on politics, world, sports, entertainment and lifestyle, log on to our website latestly.com).