Rajasthan Royals Skipper Steve Smith Has A Motivational Message For Fans Ahead of RR vs CSK, IPL 2020 (Watch Video) 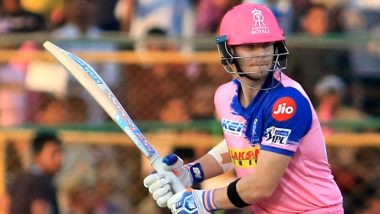 Rajasthan Royals (RR) under the captaincy of Steve Smith will lock horns with Chennai Super Kings (CSK) in Dream11 Indian Premier League (IPL), 2020 match no 4. The game will be held at Sharjah Cricket Stadium, Sharjah on September 22, 2020. This will be the opening game for RR, while CSK will play the second match of the tournament. Rajasthan Royals finished at the sixth position in the previous season. RR won the inaugural edition of IPL in 2008 where they defeated CSK in the final. Meanwhile, Steve Smith has a motivational message for fans ahead of RR vs CSK, Dream11 IPL 2020. RR vs CSK IPL 2020 Dream11 Team: Sanju Samson, Sam Curran and Other Key Players You Must Pick in Your Fantasy XI.

Rajasthan Royals was led by Ajinkya Rahane in Ithe previous season, however, he has now been bought by Delhi Capitals. Steve Smith in his video said that RR team will fight till the end and hope to relive 12 years back glory when they won IPL 2008. Smith also added that it is going to be a tough long season and IPL 2020 is going to be a different one. RR side will have to leave no stone unturned to defeats MS Dhoni's Chennai Super Kings, especially when CSK side registered a victory against Mumbai Indians in their previous game. MS Dhoni, Ravindra Jadeja, Shane Watson & Other Chennai Super Kings Players Chill Out at Shoot Session Ahead of RR vs CSK, IPL 2020 (Watch Video)

Rajasthan Royals indeed will want to win the hearts of their fans in their upcoming game against CSK. Steve Smith will miss Jos Buttler and Ben Stokes in the upcoming RR vs CSK, IPL 2020 match, as former is still spending time in quarantine, while latter is in New Zealand to take care of his father who is not well.

(The above story first appeared on LatestLY on Sep 22, 2020 12:53 PM IST. For more news and updates on politics, world, sports, entertainment and lifestyle, log on to our website latestly.com).