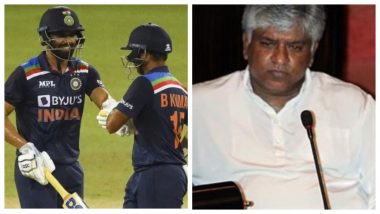 Shikhar Dhawan-led Indian team won the second ODI against Sri Lanka at the Premadasa Stadium last night and thus Men in Blue clinched the series. Post this, the Rajasthan Royals took to social media and took a subtle jibe at former Sri Lankan great Arjuna Ranatunga. The team took to social media and did not mention anyone's name and just wrote, "B team?" As one may recall, Arjuna Ranatunga a few days ago the former Sri Lankan great had slammed the Sri Lankan Cricket Association for arranging matches with the India B team. IND vs SL 2nd ODI Stat Highlights: Deepak Chahar Shines in India’s Win.

"This is a second-string Indian team and their coming here is an insult to our cricket. I blame the current administration for agreeing to play with them due to television marketing needs," Ranatunga said. But just after the Indian team won the first ODI, the netizens and Virender Sehwag also took a jibe at the former Sri Lankan great. After India clinched the series, Rajasthan Royals also took a jibe at SL.

Team India won the match by three wickets and five balls to spare. It was Deepak Chahar's 69 runs that led the Indian team to a superb win. The last ODI of the three-games series will be played on Friday and then the Indian team will be also locking horns with the same opponent for the T20I series. India & Sri Lanka will play three T20I games in the series.

(The above story first appeared on LatestLY on Jul 21, 2021 04:10 PM IST. For more news and updates on politics, world, sports, entertainment and lifestyle, log on to our website latestly.com).