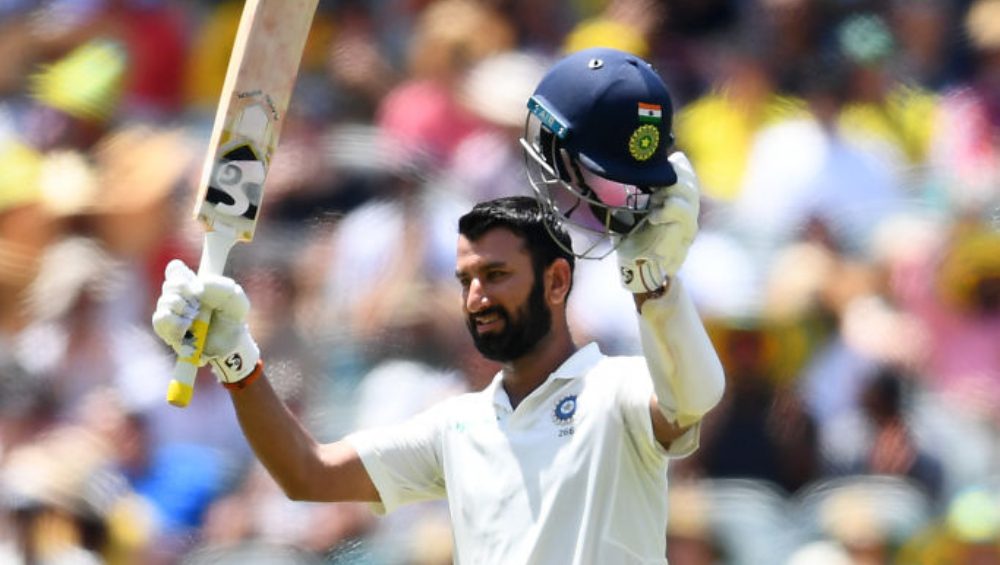 New Delhi, January 11: Cheteshwar Pujara once again showed why he is the best in the business when it comes to red-ball cricket as his unbeaten 162 alongwith Sheldon Jackson's unbeaten 99 helped Saurashtra reach 296/2 at the end of the first day against Karnataka in Rajkot. Pujara's knock off 238 balls contained 17 boundaries and a six. Mohammad Saif's unbeaten 99 along with Rinku Singh's 62 powered hosts Uttar Pradesh to 295/5 against Baroda at the Green Park Stadium in Kanpur on Saturday. Despite some early hiccups, Saif and Singh repaired the damage with a 116-run partnership for the fifth wicket.

For Baroda, Anureet Singh scalped two wickets while Lukman Meriwala, Atit Sheth and Bhargav Bhatt picked up one each. In Thiruvananthapuram, the Punjab bowlers came out all guns blazing to wrap up hosts Kerala at just 227 runs with Siddarth Kaul, Baltej Singh and Vinay Choudhary picking up three wickets each. Salman Nizar played a valiant 91-run knock but lacked support from the batsmen. Cheteshwar Pujara Falls Prey to Kagiso Rabada After Slamming His 22nd Test Fifty in the 2nd India vs South Africa Test 2019.

Punjab too, suffered some early jolts to end the day at 46/2 with Kerala's MD Nidheesh packing back the two openers in quick succession. Gujarat were 258/4 against hosts Rajasthan in Jaipur with Samit Gohel and Bhargav Merai contributing with 93 and 54 runs respectively. For the home side, Tanveer Ul-Haq and Rituraj Singh picked up two wickets each.

Akshay Wakhare's (5/56) fifer saw Bengal being bowled out for a paltry 170 runs before Vidarbha were reduced to 89/3 when stumps were drawn for the day in Nagpur. The hosts still trail by 81 runs with Ganesh Satish batting on 15 runs.

Another fifer by KV Sasikanth (5/60) helped Andhra bundle out Hyderabad for 225 runs in Ongole even as Jaweed Ali played a gritty 98-run knock. In return, Andhra were 13 for no loss. Himanshu Sangwan's 6/33 saw the entire Madhya Pradesh side back in the hut after putting on just 124 runs in Delhi. The Railways then ended the day at 104/3 with opener Mrunal Devdhar and Saurabh Singh batting on 43 and three runs respectively.

Some valiant middle-order contribution by Harpreet Singh (50), Amandeep Khare (105) and Shashank Singh (60 batting) saw Chhattisgarh reaching 276/7 at the close of the first day against hosts Assam.

Arup Das and Riyan Parag bagged three wickets each for the hosts. Hosts Maharashtra were 227/5 against Jharkhand as Azim Kazi was batting on 70 while Vishant More contributed with 67 runs before being retired hut. For the visitors, Utkarsh Singh and Rahul Shukla picked up two wickets each.

Skipper Parvez Rasool's (171 batting) scintillating knock guided Jammu and Kashmir to 338/7 against Services in Delhi. Rasool's innings was laced with 23 boundaries and a couple of hits into the stands.

Suryakant Pradhan's exceptional bowling figures -- 6/36 -- saw Haryana succumbing at just 90 runs in their first essay before Odisha took a 51-run lead after ending the day at 141/5 in Rohtak. Opener Indrajit Kumar's fantastic 134 along with some notable contributions by Kumar Mridul (51) and MD Rahmatullah (67) saw Bihar ending the first day at 308/5 against Manipur. Bishworjit Konthoujam picked up two wickets for Manipur while Kangabam Singh, Ajay Singh and Sultan Karim settled for one each.

Goa skipper Amit Verma led from the front as his unbeaten 113-run knock helped the side close the first day at 252/7 against Puducherry. Shrikant Mundhe's 166 and Hokaito Zhimomi's 76 powered Nagaland to 356/6 against Arunachal Pradesh in Dimapur. Techi Neri picked two wickets while Karkir Taye, Akhilesh Sahani and Kengo Goken Bam settled for a wicket each for Arunachal.