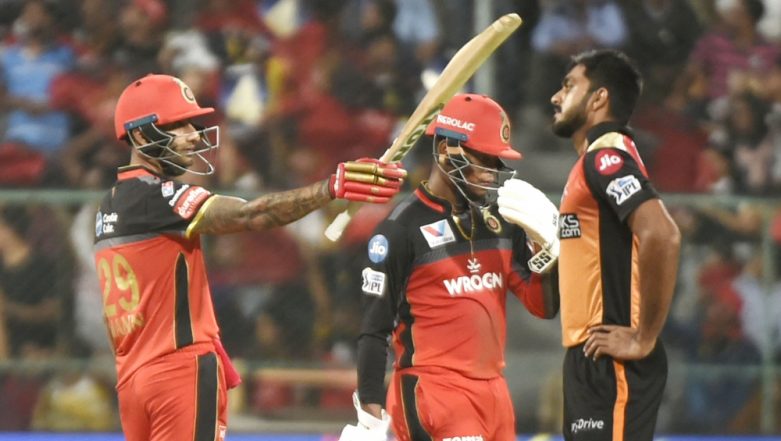 Royal Challengers Bangalore (RCB) bowed out of Indian Premier League 2019 (IPL 2019) with a win over Sunrisers Hyderabad (SRH) at the M Chinnaswamy Stadium in Bengaluru. RCB chased down 176 with four balls and as many wickets to spare. Following the defeat, Sunrisers’ chances of making it to the playoffs now depends on the Mumbai Indians vs Kolkata Knight Riders result. RCB vs SRH Highlights, IPL 2019: Royal Challengers Bangalore Bow Out on a High, Dent Sunrisers Hyderabad's Hopes of Making it to Playoffs.

The equation is simple, if Mumbai Indians win, Sunrisers will go through to playoffs. And if Knight Riders win they will qualify for the next round with SRH missing out on the last four place.

Fowling the win, Kohli was happy with the fact that RCB plays with intent towards the end of the tournament. “We are happy with the way guys have turned things around and the kind of cricket that we have played in the second half. A lot of credit goes to the team management for getting us back in the right frame of mind. We haven't finished in the position that we wanted to. But because the second half has been so good it doesn't feel like a bad season. We won last 5 off our 7 matches and with one no-result, it is something that we can be proud of. It is such a short format that often 5 or 7 minutes decide the outcome. We can be proud of the boys effort in the final few matches,” Kohli said after the match. DC vs RR Stat Highlights IPL 2019: Rishabh Pant, Amit Mishra Shine As Delhi Capitals Knock Out Rajasthan Royals.

Here are some stats from RCB vs SRH IPL 2019 match

# Yuzvendra Chahal becomes the first bowler to take 100 wickets for RCB in IPL.

Earlier captain Kane Williamson powered Sunrisers to 175 for seven. The SRH skipper finished unbeaten on 70 off just 43 balls. The right-hander smashed five fours and four sixes during his knock.