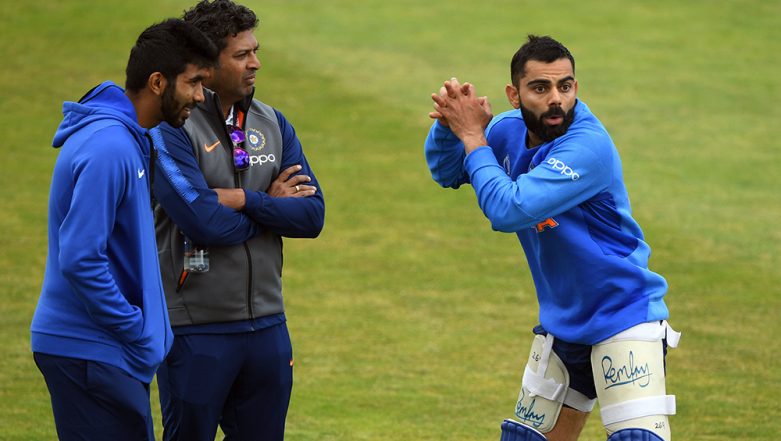 Ahead of the India vs Sri Lanka ICC Cricket match, the official handle of Cricket World Cup shared an interesting photo of Virat Kohli, which invited some hilarious reactions from Indian cricket fans on Twitter. The photo, was shared by the organisers of World Cup 2019, showed the Indian skipper acting to play shot while Jasprit Bumrah and fitness trainer looked at him closely.

The right-hand batsman Kohli can be seen imitating someone’s style of playing in the photo while trying to explain something to Bumrah and. Sharing the photo, Cricket World Cup asked fans to come up with some captions for the same. Have a look at the photo below.

Twitterati were quickly attracted to the challenge and some of them replied with funny and comical comments, which are definitely worth taking a look. While some posted humorous captions for the photo, others came with humourous memes in comments. Have a look at some of the replies which will surely make you go ROFL. India vs Sri Lanka Dream11 Team Predictions: Best Picks for All-Rounders, Batsmen, Bowlers & Wicket-Keepers for IND vs SL in ICC Cricket World Cup 2019 Match 44.

I will go with this, and will come with the World Cup. pic.twitter.com/n2CPd5d4w3

Meanwhile, India is set to play Sri Lanka on July 6 in the ongoing ICC Cricket World Cup 2019. The match is a dead-rubber Sri Lanka is already out of the tournament with just eight points from 8 matches, two of which were washed out. On the other hand, the men in blue Indian team qualified for the semi-finals after their previous victory over Bangladesh by 28 runs. Virat Kohli and company currently has 13 points in the points table with six victories in eight matches, one of which against New Zealand was washed out due to rain.