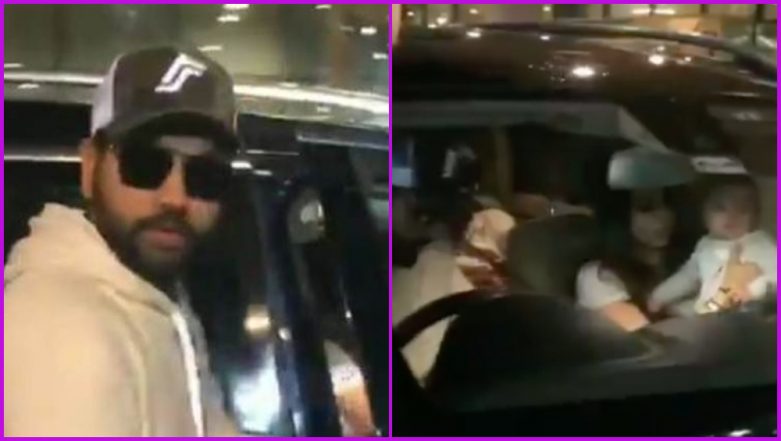 Indian cricket team’s opening batsman and vice-captain Rohit Sharma arrived in India after returning from England. Team India is in England for the ICC Cricket World Cup 2019 (CWC 2019) and were knocked out of the tournament following the defeat against New Zealand in the semi-finals. While rest of the team India members are expected to arrive in India on July 14, Rohit was spotted at the Mumbai airport along with wife Ritika Sajdeh and daughter Samaira. Is It Time to Hand Over White Ball Captaincy to Rohit Sharma?

Interestingly, Rohit took to the driver’s seat as he drove his family home. The right-handed batsman had a good time in the CWC19 as he scored 648 runs in nine matches. Rohit currently leads the list of most runs in the CWC19 and is expected to finish on top. Review of Indian Cricket Team’s Journey in ICC World Cup 2019: Virat Kohli and Co Fall at the Knockout Hurdle.

During the tournament, Rohit scored five centuries, the most by a batsman in a single edition of the World Cup. However, in the semis, Rohit was dismissed for juts one run. Rift in Indian Cricket Team With Players Divided in Virat Kohli and Rohit Sharma Camps, Claims Report; Is This the Reason Behind India’s Ouster From CWC 2019?.

Following, India’s ouster Rohit took to Twitter and wrote, “we failed to deliver as a team when it mattered, 30 minutes of poor cricket yesterday & that snatched away our chance for the cup. My heart is heavy as I’m sure yours is too.The support away from home was incredible. Thank you all for painting most of uk blue wherever we played (sic).”