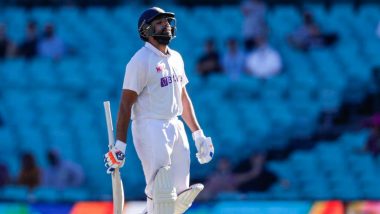 The Indian team is having quite a hard day at office since the start of the first test between India and England at the Chepauk, Chennai. On day 4 of the first Test match between India and England, the visitors declared the innings as they enjoyed a massive 420-run lead. Post this, India was invited to bat and it was Rohit Sharma who once again made way to the pavilion on the score of 12 runs. This did not go down well with the fans and they trolled the opener brutally. While some of them said that Mayank Agarwal deserves a chance in place of Sharma. India vs England Highlights 1st Test 2021 Day 4: IND 39/1 in Chase of 420 at Stumps.

Before getting on the reactions, let’s have a look at how the match panned out for both teams. So England was blazing guns and all the other Indian bowlers had to toil hard for wickets. Only Ravichandran Ashwin led the way with six wickets and bowled with an economy of 3.49. The England team got bundled out on the score of 178 runs. Now let's have a look at the tweets by fans which were directed to the Indian opener.

Rohit and ICT fans waiting for a good knock by Rohit Sharma:- pic.twitter.com/N5NJlFckrn

Lack of off-stump awareness did him in today. pic.twitter.com/GYYYOjyuZX

When you need him most... He goes out cheaply... So the hatred begins for Rohit Sharma 💔 #INDvsENG #RohitSharma

The Indian team currently needs 381 runs to win the game. As of now, we have Shubman Gill and Cheteshwar Pujara batting on the score of 15 and 12 runs respectively.

(The above story first appeared on LatestLY on Feb 08, 2021 05:34 PM IST. For more news and updates on politics, world, sports, entertainment and lifestyle, log on to our website latestly.com).