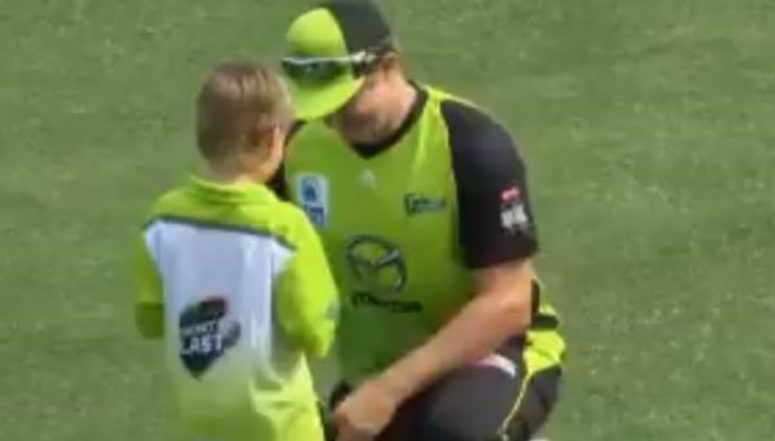 Shane Watson hung his boots from international cricket in 2016. However, the cricketer keeps himself busy by playing for various leagues around the world. The former Australian cricketer is currently playing the Big Bash League 2018-19 for Sydney Thunder.  As his team locked horns with Adelaide Strikers, the opener experienced a super emotional moment of his life. During the game, it was his son Will who ran up to him on the field asking for an autograph. The CSK player not only greeted his son but also obliged his son with an autograph. Bizarre Seven-ball over Dismissal in Big Bash League.

The cute moment was shared by the official page of Big Bash League. “A moment to remember for Shane Watson and his son Will! ❤ #BBL08,” read the caption of the adorable video.  Chennai Super Kings also had a reaction to the cute video. CSK retweeted the video and wrote, “"Deivangal ellam thotre pogum thandhai anbin munney! Dedicated to all the loving #SuperDads! #WhistlePodu #Yellove."

Shane Watson played a pivotal role in the finals of the IPL 11 by scoring 117 not out against Sunrisers Hyderabad. CSK chased the target of 179 runs. The former Autsralian cricketer has retained by the franchise ahead of IPL 2019 auction and will once again play for the three-time champions. He was a part of Royal Challengers Bangalore in 2017 and also performed captaincy duties during the season but was released.