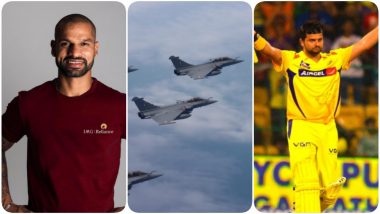 The social media was a buzz as the awaited the arrivals of five Rafale jets which were imported from France. No sooner they landed, the netizens expressed their happiness on social media and this also included Gautam Gambhir, Shikhar Dhawan, Suresh Raina and Manoj Tiwary who took to posted tweets welcoming the birds. The jets landed at the Ambala airbase in the afternoon and were given a customary salute with water cannons. Section 144 had been imposed in four villages and photography was also prohibited in the district while the jets were landing. Rafale Fighter Jets Land in India: HM Amit Shah Says ‘Induction of Next-Generation Aircraft Will Make India Powerful and Secure Nation’.

The jets were parked in UAE after they took off from France on Monday. The fighter planes had made their stay over in UAE for about 20 hours before landing on the Indian soil. No sooner they landed in India, the countrymen rejoiced and welcomed the birds with tweets. Suresh Raina, Gautam Gambhir, Shikhar Dhawan and Manoj Tiwary were the ones who tweeted about the same. Check out their tweets below:

A glorious moment for entire nation as @IAF_MCC gets 5 Rafale to join it's "Golden Arrows" squadron. This will surely strengthen our nation security. Congratulations to the entire nation ! Jai Hind 🙏🇮🇳#RafaleInIndia #IndianAirForce https://t.co/rR5i0f7HWk

Earthquake of magnitude 8.5 has rattled our neighbouring countries wit no casualties after learning about #RafaleJets landed in INDIA 🇮🇳

Wat a boost for our Indian air force 👊

I’m pretty sure that, there will be no provocation in near future from our neighbors😊 #RafaleInIndia pic.twitter.com/DyTCsSRYuV

(The above story first appeared on LatestLY on Jul 29, 2020 09:19 PM IST. For more news and updates on politics, world, sports, entertainment and lifestyle, log on to our website latestly.com).