Shoaib Akhtar Birthday Special: 6/11 vs New Zealand and Other Stupendous Performances by the Rawalpindi Express 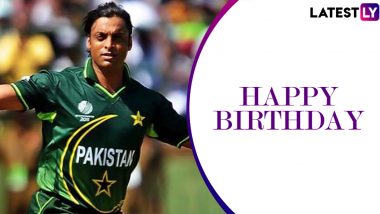 Arguably the fastest bowler to have ever stepped onto the cricket field, Shoaib Akhtar celebrates his 45th birthday on Thursday (August 13, 2020). Hailed as the Rawalpindi Express, the right-arm speedster used to instil fear in batsmen’s mind with his staggering pace. In fact, his lightning-fast deliveries have also injured many batsmen, forcing them to leave the field. Along with a staggering pace, Akhtar also has a sharp cricketing mind which made him even more lethal. He used the follow the nose and toes policy as the pacer looked to disturb the batsman with a barrage of bouncer before rattling the stumps with a toe-crushing yorker. Below, we’ll look back at some of his best spells. Shoaib Akhtar Believes He Can Dominate Steve Smith ‘Even Today.’

Making his international debut in 1997, Akhtar didn’t take long in cementing his place in the Pakistan team. Despite the presence of Wasim Akram and Waqar Younis, Akhtar never lived under their shadow. His raw pace used to take the pitch out of the equation which made Akhtar’s a captain’s delight. In fact, he holds the record of delivering the fastest bowl in international cricket, i.e. 161.3 kmph. Meanwhile, as the legendary cricketer turns a year older, let’s revisit some of his best performances. Shoaib Akhtar Recalls Moment When He Stormed Into Harbhajan Singh’s Hotel Room.

With the Lahore pitch known to favour the spinner, the likes of Saqlain Mushtaq and Danish Kaneria were expected to trouble the Kiwi batsmen in the first Test of 2002 Test series. However, Akhtar produced a staggering spell and rattled New Zealand’s top order in the second innings of the game. He took six wickets inside nine overs as the visitors got bundled out for just 73 runs. Stephen Fleming and Co couldn’t make any comeback after that as they lost the match by an innings and 324 runs.

5/43 vs South Africa in Durban

Akhtar made an impeccable use of the Durban track in the second Test of Pakistan’s 1998 tour of South Africa and claimed his maiden five-fer in Test cricket. After the visitors got bundled out for 258 runs while batting first, the young pacer breathed fire with the ball and brought his side back in the contest. His efforts proved to be fruitful as Aamer Sohail and Co won the game by 29 runs.

5/24 vs West Indies in Sharjah

On a pitch where Pakistan posted 493 runs while batting first, Akhtar produced a stellar spell and claimed yet another five-wicket haul. It was the first match of 2002 Test series against West Indies and the venue was Sharjah. In the last innings of the game, the right-arm pacer didn’t let the Caribbean batsmen settle their feet and took wickets in a cluster. Riding of his efforts, Pakistan won the game by 170 runs.

6/16 vs New Zealand in Karachi

The Rawalpindi Express was at his best during New Zealand’s 2002 tour of Pakistan. In the first ODI of the series, the talismanic pacer was almost unplayable for the Kiwi batsmen as he ran through the opposition batting line-up with his blistering spell. Akhtar took six wickets in the second innings and registered his best figures in ODIs. Thanks to his spell, Pakistan won the encounter by a huge margin of 153 runs.

5/25 vs Australia in Brisbane

In the third ODI of Pakistan's 2002 tour of Australia, Shoaib Akhtar hurried the mighty Australian batting line up with his pace and bounce. The right-arm quick bowled like thunder and took five wickets of the home team. Courtesy Akhtar’s spell, the hosts were bundled out for 165 runs and the Men in Green won the match by 91 runs.

Akhtar bid adieu to the game after the 2011 World Cup but not before scalping 178, 247 and 19 wickets from 46 Tests, 163 ODIs and 15 T20Is. However, the former pacer continues to be in the headlines with his sensational statements even after retirement. Of late, Akhtar has been very active on social media and doesn’t refrain from his views on any topic.

(The above story first appeared on LatestLY on Aug 13, 2020 08:01 AM IST. For more news and updates on politics, world, sports, entertainment and lifestyle, log on to our website latestly.com).