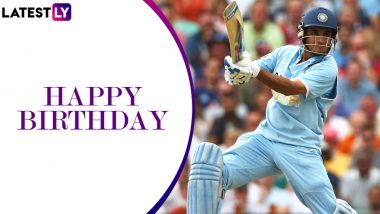 One of the finest batsmen to have donned the Indian jersey, Sourav Ganguly celebrates his 48th birthday on Wednesday (July 8, 2020). Hailed as the ‘Prince of Kolkata,’ Ganguly holds a special place in Indian cricket history. As the captain of the team, the southpaw never shied away from making bold decisions and made the Indian team a force to reckon with. His batting prowess were also sensational as he boasts off a sensational record in all forms of cricket. Be it tackling the swinging deliveries at Lord’s or facing the spinners on the rank-turner of Feroz Shah Kotla, Ganguly rose to every challenge and played numerous magnificent knocks. Sourav Ganguly Reveals Why Sachin Tendulkar Never Took Strike on First Ball of Cricket Match.

Although, Ganguly could score runs all over the park. However, it was his ability to hit the ball on the off-side which loaded fear in the mind of bowlers. The left-handed batsman was second to none when it came to caressing the ball through the covers or hitting it over the square boundary. Finding gaps was also not a difficult task for the Bengal batsman and he could place the ball at his will. Courtesy his capability to hit the ball in the off-side region, Ganguly went on to earn the nickname ‘God Of The Off-Side.’ Meanwhile, as the legendary cricketer turns a year older, let’s look at some shots which showcases why Ganguly was the ‘God Of Off-Side.’ Sourav Ganguly Clarifies Team India To Not Participate in Cricket Camps Before August.

Ganguly announced his retirement from international cricket in 2008 but not before scoring 7212 and 11363 runs from 113 Test matches and 311 ODIs. Despite having retired, Ganguly continues to serve Indian cricket off the field. As of now, Ganguly is the president of Board of Control for Cricket in India (BCCI).

(The above story first appeared on LatestLY on Jul 08, 2020 07:00 AM IST. For more news and updates on politics, world, sports, entertainment and lifestyle, log on to our website latestly.com).