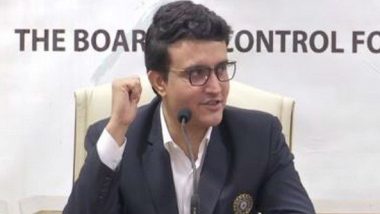 For a while now there have been news reports of the BCCI organising a training camp for the players very soon in Dharamshala. Now the BCCI president Sourav Ganguly has clarified that Virat Kohli and company will not participate in any camp before August. The menace of the coronavirus has already sent the sporting schedules for a toss and the BCCI is currently reworking on the same. IPL 2020, Asia Cup 2020, World Cup 2020 are the events which have suffered massively. With the lockdown being imposed on the entire country, the players are confined to their houses. BCCI Plans Resumption of Cricket Post Lockdown, Could Conduct an Isolated Camp for Players in Dharamshala.

However, Rohit Sharma has started training outdoors and a few days ago the Hitman shared a picture of himself on social media. “Good to be back on the park getting some work done felt like myself after a long time," read the caption of the snap. However, with the reworking of the schedules going on, the BCCI is trying their level best to not clash the IPL 2020 with the T20 World Cup 2020 which was scheduled to happen later this year. As of now, hosting the Asia Cup 2020 also looks like a distant possibility.

“Asia Cup will be a struggle this year. Going by the statement of the Chief Executive of the PCB, the window that suits them doesn’t suit India. Maybe they can postpone PSL next year if BCCI is able to open up a window during that period. Otherwise conducting the Asia Cup doesn’t seem too practical as these are challenging times,” an official was quoted as saying by the Times of India. It would be interesting to see how the schedules are rescheduled by the BCCI.

(The above story first appeared on LatestLY on Jun 29, 2020 12:46 PM IST. For more news and updates on politics, world, sports, entertainment and lifestyle, log on to our website latestly.com).