Sourav Ganguly Sends a Message to Virat Kohli- Led India, Says ‘I Expect You To Win in Australia’ 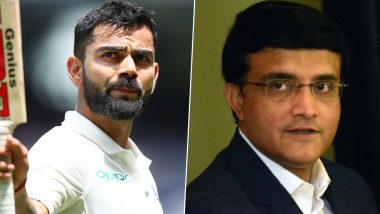 The Indian team is all set to play in Australia later this year. The schedules are not yet confirmed but especially with the fate of IPL 2020 and T20 World Cup 2020 hanging. But the BCCI PresidentSourav Ganguly during an interview said that the tour is very much on and had a message for the Indian team. He told Virat Kohli- led the Indian team that he expects the team to win cause they have set the kind of standards set by them. He also said that Team India needs to bat better and said that it's going to be a tough series. IPL 2020 Update: Sourav Ganguly Wants Indian Premier League 13 to Take Place in India, Says ’It’s Our First Priority ‘.

As one may remember, India had quite a successful tour in Australia last year.  The Men in Blue drew the T20Is  1-1. Also, Virat Kohli led Indian team became the first Asian side to win a Test series Down Under, by 2-1. In addition, they won the three-match ODI series by 2-1. The team would want to replicate the performances even this time.

(The above story first appeared on LatestLY on Jul 12, 2020 07:50 PM IST. For more news and updates on politics, world, sports, entertainment and lifestyle, log on to our website latestly.com).