Both sides have underperformed and struggled to make any sort of real impact so far and they would want a win to bring about some change in their fortunes. The SRH vs RR match would be played at the Dubai International Cricket Stadium at 7:30 PM IST. 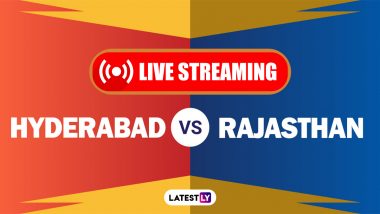 Sunrisers Hyderabad (SRH) face off against Rajasthan Royals (RR) in the Indian Premier League on Monday, September 27. The match would be played at the Dubai International Cricket Stadium and is scheduled to start at 7:30 pm IST (Indian Standard Time). Needless to say but the IPL 2021 season has been poor for both Sunrisers and Royals, who find themselves in the lower half of the table and loads of work to do at this point. The Kane Williamson-led franchise would no longer be able to make it to the playoffs after a terrible campaign where they could win just one match out of nine games played. Nothing really has worked for them either. Regular skipper David Warner was stripped of his captaincy following a bad start and the Australian also seemed to lose his batting form. SRH vs RR Preview: Likely Playing XIs, Key Battles, Head to Head and Other Things You Need To Know About VIVO IPL 2021 Match 40

The middle-order comprising of Manish Pandey, Kedar Jadhav and captain Kane Williamson, too, have been wobbly and as a result of which, they have significantly failed to chase down even low totals. The bowling attack, hit by the absence of T Natarajan, has too not been effective. Apart from Rashid Khan, no other SRH bowler has made any sort of real impact and that explains their position (8th) in the points table.SRH vs RR Dream11 Team Prediction IPL 2021: Tips To Pick Best Fantasy Playing XI for Sunrisers Hyderabad vs Rajasthan Royals Indian Premier League Season 14 Match 40

Rajasthan Royals on the other hand, have been good but only in patches. They started off the UAE leg of IPL 2021 on a high with a morale-boosting two-run win over Punjab Kings but fell to Delhi Capitals in the very next match. Needing a win to somehow stay alive in the playoff race, Sanju Samson's side would have to be at their absolute best and ensured that no more mistakes happen, or else, their dreams of making it to the last four, could just fade.

Those unable to watch the SRH vs RR match live on television can follow the game online. Disney+Hotstar will be live streaming the Sunrisers Hyderabad vs Rajasthan Royals match online for its fans in India. Fans, however, need to subscribe to Hotstar by paying a nominal subscription fee. JIO are also providing Hotstar subscriptions on select plans.

(The above story first appeared on LatestLY on Sep 27, 2021 10:12 AM IST. For more news and updates on politics, world, sports, entertainment and lifestyle, log on to our website latestly.com).