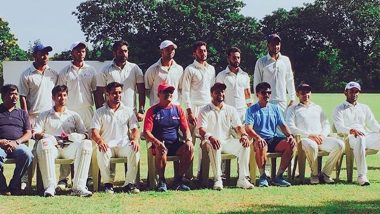 Former Delhi cricketer Sanjay Dobal passed away on Monday (June 29, 2020) after suffering a cardiac arrest. The former all-rounder played a lot of cricket for Delhi in the domestic circuit and guided his side to many victories. After announcing retirement from the game, he became a staff member of Delhi U-23 team. In fact, he was known as a great lover of the game who helped many budding cricketers. Hence, as the sad news came out, several members of cricket fraternity mourned his death. Suresh Raina was also saddened by the tragedy as he expressed grief over Dobal’s demise and offered condolences to his family. Sanjay Dobal, Former Delhi Cricketer, Dies at 53 Due to Cardiac Arrest.

“He was always a part of our family at Air India, really sad to hear about the passing away of Sanjay Dhobal. Heartfelt condolences to his family, may his soul rest in peace... Om Shanti,” wrote Raina while sharing an old picture with Dobal. The left-handed batsman spent a lot of time with Dobal during his stint with Air India and the two seemed to share a great bond. Meanwhile, let’s look at Raina’s tribute for Dobal.

He was always a part of our family at Air India, really sad to hear about the passing away of Sanjay Dhobal. Heartfelt condolences to his family, may his soul rest in peace... Om Shanti 🙏

Dobal was 53 and was living with his wife and two sons Siddhant and Ekansh. He was said to have been suffering from a severe case of pneumonia and was also tested positive for COVID-19 virus. Along with Raina, the likes of Aakash Chopra and RP Singh also took to social media and mourned the death of the former cricketer.

Meanwhile, Raina is likely to get back in action if, as per plan, BCCI manages to conduct the 2020 edition of the Indian Premier League (IPL). However, they have to wait for the official confirmation of International Cricket Council (ICC) regarding the postponement of ICC T20 World Cup 2007.

(The above story first appeared on LatestLY on Jun 29, 2020 05:24 PM IST. For more news and updates on politics, world, sports, entertainment and lifestyle, log on to our website latestly.com).